Lee’s Invasion of the North: the Campaign of Antietam (Sharpsburg), 1862, during the American Civil War 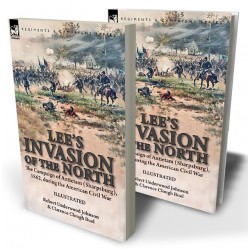 The defeat of Lee’s great advance

This book, concerning a pivotal campaign of the American Civil War, gathers together numerous accounts by those who were present when these events took place. Robert E Lee’s great initiative in 1862, at the head of the Confederate Army, was to invade the northern states to resupply his army and destabilise Union morale. It brought about the Battle of Antietam (Sharpsburg for Confederate forces). The ‘Maryland (or Antietam) Campaign’ resulted in a repulse of the Confederates by the Union Army of the Potomac under McClellan. Nevertheless, the fighting was hard and bitterly contested. The Battle of Antietam itself is regarded as the bloodiest one-day battle in American history with approaching 23,000 losses to all combatants. The struggles across the infamous ‘Corn Field’ in that battle have become iconic in American military history. Other famous engagements included the capture of Harper’s Ferry by Jackson and the Battle of South Mountain. The contributors to this book range from generals to regimental officers to ordinary soldiers, so the reader is able to understand these events from every perspective. Illustrated with maps and pictures.

So, the morning wore away, and the fighting on the right ceased entirely. That was fresh anxiety—the scales were turning perhaps, but which way? About noon the battle began afresh. This must have been Franklin’s men of the Sixth Corps, for the firing was nearer, and they came up behind the centre. Suddenly a stir beginning far up on the right, and running like a wave along the line, brought the regiment to its feet. A silence fell on every one at once, for each felt that the momentous “now” had come. Just as we started I saw, with a little shock, a line-officer take out his watch to note the hour, as though the affair beyond the creek were a business appointment which he was going to keep.
When we reached the brow of the hill the fringe of trees along the creek screened the fighting entirely, and we were deployed as skirmishers under their cover. We sat there two hours. All that time the rest of the corps had been moving over the stone bridge and going into position on the other side of the creek. Then we were ordered over at a ford which had been found below the bridge, Where the water was waist-deep. One man was shot in mid-stream. At the foot of the slope on the opposite side the line was formed and we moved up through the thin woods. Reaching the level, we lay down behind a battery which seemed to have been disabled. There, if anywhere, I should have remembered that I was soaking wet from my waist down. So great was the excitement, however, that I have never been able to recall it. Here some of the men, going to the rear for water, discovered in the ashes of some hay-ricks which had been fired by our shells the charred remains of several Confederates. After long waiting it became noised along the line that we were to take a battery that was at work several hundred yards ahead on the top of a hill. This narrowed the field and brought us to consider the work before us more attentively.
Right across our front, two hundred feet or so away, ran a country road bordered on each side by a snake fence. Beyond this road stretched a ploughed field several hundred feet in length, sloping up to the battery, which was hidden in a cornfield. A stone fence, breast-high, enclosed the field on the left, and behind it lay a regiment of Confederates, who would be directly on our flank if we should attempt the slope. The prospect was far from encouraging, but the order came to get ready for the attempt.
Our knapsacks were left on the ground behind us. At the word, a rush was made for the fences. The line was so disordered by the time the second fence was passed that we hurried forward to a shallow undulation a few feet ahead, and lay down among the furrows to re-form, doing so by crawling up into line. A hundred feet or so ahead was a similar undulation to which we ran for a second shelter. The battery, which at first had not seemed to notice us, now, apprised of its danger, opened fire upon us. We were getting ready now for the charge proper, but were still lying on our faces. Lieutenant-Colonel Kimball was ramping up and down the line. The discreet regiment behind the fence was silent. Now and then a bullet from them cut the air over our heads, but generally they were reserving their fire for that better shot which they knew they would get in a few minutes.
The battery, however, whose shots at first went over our heads, had depressed its guns so as to shave the surface of the ground. Its fire was beginning to tell. I remember looking behind and seeing an officer riding diagonally across the field—a most inviting target—instinctively bending his head down over his horse’s neck, as though he were riding through driving rain. While my eye was on him I saw, between me and him, a rolled overcoat with its straps on bound into the air and fall among the furrows.
One of the enemy’s grape-shot had ploughed a groove in the skull of a young fellow and had cut his overcoat from his shoulders. He never stirred from his position, but lay there face downward—a dreadful spectacle. A moment after, I heard a man cursing a comrade for lying on him heavily. He was cursing a dying man.
You may also like