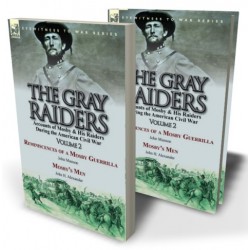 In this second volume of personal narratives by two members of Mosby’s command, readers will find the personal experiences of Johnny Munson, a teenager from Richmond who realised his ambitions for high adventure riding with Mosby. John Alexander, whose book is also included here, set out to join his friends in the ‘Black Horse’ troop of the 4th Virginia Cavalry, but found the appeal of a ‘partisan ranger’ life irresistible. The American Civil War brought to the fore a number of outstanding military figures and, given its culture and chivalric spirit, it is perhaps fair to say that the South provided more that its share of extraordinary soldiers. There is something alluring about the daredevil raider, who appears from nowhere behind enemy lines and wreaks havoc, and then disappears before he can be brought to account. Such men were became legends, and foremost among them in the Confederate Army was the ‘Gray Ghost,’ Virginian cavalryman John Singleton Mosby. Like his predecessor, Robert Rogers of the Rangers, he possessed courage, intellect, daring and martial fortitude ready-made for the perilous form of war he chose to fight. Fortunately, several of Mosby’s men left fine first hand accounts of their time serving under this famous commander, and Leonaur is republishing all of them—in value for money omnibus editions—to provide American Civil War enthusiasts with a comprehensive library of the subject.
Leonaur editions are newly typeset and are not facsimiles; each title is available in softcover and hardback with dustjacket.