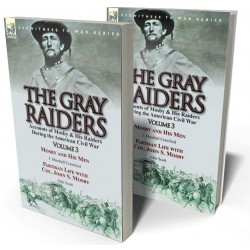 Mosby and his Gray Raiders ride out for a final time

This unique Leonaur book is the final volume of three that gather together the accounts of the men who fought for the cause of the Confederacy during the American Civil War under the inspired and enigmatic leadership of John S. Mosby—the Gray Ghost. Mosby did not originate the daring ‘hit and run’ tactics of guerrilla warfare behind enemy lines, but he was a superb exponent of it and justifiably earned his place in the pantheon of the greatest guerrilla commanders. This volume contains two books. The first, ‘Mosby and his Men’ by Crawford is a very thorough history of the activities of Mosby’s command including many firsthand accounts by soldiers and other observers. Major Scott’s substantial work also provides firsthand accounts principally in the form of letters. There is an abiding fascination with soldiers and units who fight their wars at extreme risk outside the formalities and regimes of the ordered battle lines. These three Leonaur volumes, containing six works—including Mosby’s own wartime memoirs—provide modern readers with possibly the most comprehensive available account of the remarkable Mosby and his men based on firsthand accounts. Highly recommended for students of the Civil War and the Confederacy. Both titles in this volume have been newly typeset by Leonaur to enable them to appear within a single volume, but are complete and unedited.