Kilpatrick and His Raid: the Career of a Notable Commander of Union Cavalry and His Raid Through Virginia, 1864, With Two Short Accounts of the Kilpatrick Raid

Home » Non Fiction » American Civil War » Raids and Raiders » Kilpatrick and His Raid: the Career of a Notable Commander of Union Cavalry and His Raid Through Virginia, 1864, With Two Short Accounts of the Kilpatrick Raid 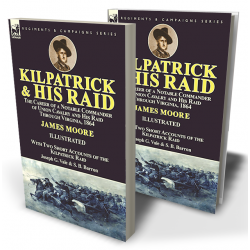 The subject of this book, Hugh Judson Kilpatrick, claimed the dubious distinction of being the first Union Army officer to be wounded in the American Civil War. Commissioned in the Artillery, he quickly became an officer of Zouave infantry before joining the 2nd New York Cavalry as its lieutenant-colonel. It would henceforth be as a commander of cavalry that Kilpatrick would garner fame and infamy, for he eventually earned the nickname of ‘Kilcavalry’ because of alleged carelessness with the lives of his men. Kilpatrick rose quickly in rank until before the Battle of Gettysburg during which he was promoted to brigadier general. During the battle he ordered a pointless and rash charge which resulted in heavy casualties among his men, and the death in action of Brigadier General Farnsworth, whom Kilpatrick had accused of cowardice following his protests against carrying out orders he knew would result in disaster. Kilpatrick is particularly known for his raid through the Virginian Peninsula towards Richmond in 1864. The plan did not go well, particularly for a detached brigade under Ulric Dahlgren, which was savaged in a Confederate ambush which resulted in the death of Dahlgren. A political furore was caused when it was alleged that the purpose of the raid had been to assassinate Jefferson Davis. This unique Leonaur book relates Kilpatrick’s tempestuous career and gives insights into his raid from the perspectives of those who were involved in it on both sides of the battle lines.

While the various regiments were being manoeuvred into position to meet the onslaught of the rebels, who were sweeping down upon them, the men had time to comprehend the danger that surrounded them—rebels to the right of them, rebels to the left of them, rebels in the rear of them, rebels in front of them—surrounded; there was no salvation but to cut their way out. Visions of Libby prison and starvation flitted through their imagination, and they saw that the deadly conflict could not be avoided. Placing himself at the head of his brigade, the gallant and fearless Minty drew his sabre, and his voice rang out clear and loud: “Attention, column! Forward, trot; regulate by the centre regiment; march, gallop, march!” and away the brigade went with a yell that echoed away across the valleys.
The ground from which the start was made, and over which they charged, was a plantation of about two square miles, thickly strewn with patches of woods, deep water cuts, fences, ditches,” and morasses. At the word, away went the bold dragoons at the height of their speed. Fences were jumped and ditches were no impediment. The rattle of the sabres mingled with that of the mess-kettles and frying-pans that jingled at the side of the pack-mule brigade, which were madly pushed forward by the frightened darkies who straddled them.
Charging for their lives, and yelling like devils, Minty and his troopers encountered the rebels behind a hastily constructed barricade of rails. Pressing their rowels deep into their horses’ flanks, and raising their sabres aloft, on, on, on, nearer and nearer to the rebels they plunged.
The terror-stricken enemy could not withstand the thunderous, wave of men and horses that threatened to engulf them. They broke and ran just as Minty and his troopers were urging their horses for the decisive blow. In an instant, all was confusion. The yells of the horsemen were drowned in the clashing of steel and the groans of the dying. On pressed Minty in pursuit, his men’s sabres striking right and left, and cutting down everything in their path. The rebel horsemen were seen to reel and pitch headlong to the earth, while their frightened steeds rushed pell-mell over their bodies. Many of the rebels defended themselves with almost superhuman strength; yet it was all in vain. The charge of Federal steel was irresistible. The heads and limbs of some of the rebels were actually severed from their bodies, the head of the rider falling on one side of the horse, the lifeless trunk upon the other.
The individual instances of heroism were many. Hardly a man flinched, and when the brigade came out, more than half the sabres were stained with human blood.
It was, all admit, one of the finest charges of the war. Fully one hundred men fell under the keen sabres of Minty’s brigade. The praises of Minty and his command are upon every tongue. The Fourth United States, Fourth Michigan, First, Third, and Fourth Ohio regiments charged over a rebel battery of three guns on the left of the road; but no sooner had our men passed than the rebels again seized the cannon, and reversing them, poured grape and canister into the charging columns. General Kilpatrick, seeing this, with his staff and others, about thirty in all, moved forward to capture the guns, but found a high staked-and-ridered fence between him and the battery.
Seeing the predicament in which the general was, Private William Bailey, a young Tennessean belonging to company I, Fourth Michigan, an orderly to Colonel Minty, coolly rode up to the fence, dismounted in the face of a severe fire, tore down the fence, remounted, rode up to the battery, shot the captain, took possession of the horse and arms, and rode out. He was immediately followed by a party of men, who captured the battery and spiked the guns. In the charge, Minty’s brigade captured three stand of colours, the Fourth United States taking two, and the Fourth Michigan one.