Four Years With Morgan and Forrest: Experiences in the Confederate Army During the American Civil War 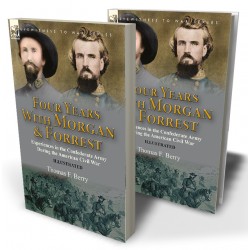 Campaigns with the daring raiding riders of the Confederacy

The war fought by the daring Confederate cavalry raiders is a singular and interesting element of the history of the American Civil War and one that has remained perennially fascinating to its students. Two of that war’s most successful CSA commanders were Nathan Bedford Forrest and John Hunt Morgan. The author of this book served under both generals with Duke’s 2nd Kentucky Cavalry and he kept a comprehensive diary of his wartime experiences which he later published as a memoir. Berry’s military career in such company could not have been anything but thrilling and, indeed, he was wounded in action several times and was captured by Union forces and escaped on thirteen occasions. Colonel Berry’s story is filled with the skirmishing actions typical of the war he fought in with men such as Jesse James and Charles Quantrell, both of whom also appear in these pages. This is an essential American Civil War personal account for every library on the subject and is recommended.