Nurse Mary: the Recollections of a Nurse During the American Civil War & Franco-Prussian War 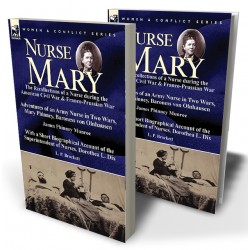 A renowned nurse of the civil war

By the time of the American Civil War medical care of wounded soldiers near to the field of battle and within military hospitals had become well established. Many committed and resourceful women on both sides of the conflict volunteered to work as nurses and several have left accounts of their experiences. The principal subject of this book, Mary Phinney, is one who served in a Union Army facility, and her experiences have been dramatized as a television series. Mary Phinney was the widow of an impoverished German aristocrat, Baron Gustav von Olnhausen. She was a committed abolitionist. Her diaries provide essential insights into the medical techniques employed in military hospitals during the civil war period and have become highly regarded reference works. She later went on to work as a nurse in the Franco-Prussian War. Phinney’s book is accompanied in this Leonaur edition by a short account of the career of another famous and highly regarded nurse of the period, Superintendent of Nurses Dorothea L. Dix.

Until you could once be in a hospital and see the state of the men as they come in, especially of those who have the blood of three weeks upon them and the dirt of as many months, you can form no idea of the undertaking. But the satisfaction on their faces when all is done and they are finally at rest is very great. Especially when a woman is near to nurse them, they seem so grateful.
These men are all of the Eleventh Corps, and everyone was shot in the first moments of the attack. They are all Germans but one, and he is Irish. I don’t believe he ran; he is a spunky little fellow and bears pain “bully.” He always smiles when I dress his wound, and only grits his teeth a little when I stuff the lint in. Next to him lies the hero of the ward, a little German boy of seventeen. A piece of shell struck him just by the lower part of the right ear, glancing upward a little, ploughing through the cheek to the bone, and cutting off the end of the nose.
It is almost impossible to give chloroform to patients when the mouth is being operated upon, and he said he did not care for it; so, they performed without any. He never even frowned; the only indication of pain was the shaking of his foot. The room was filled with doctors and lookers-on, and they did nothing but marvel. He can’t speak one word of English, is so interesting, and must have been very handsome. The other two in that room are not so badly wounded; only they have been so long neglected that they need much care.
In the next room lies a handsome German with a fractured arm. The next is wounded through the lungs, the ball coming out at the back under the left shoulder. One has a sabre-cut over the head; but it’s a flesh wound, and he will soon be right. Next is a boy of seventeen who was shot through the left elbow. But the great case of the house is my “mouth” man, a really noble fellow. He, too, is German, as all the rest. The ball entered just at the point of the collar bone nearest the throat, and lodged in the right shoulder-joint fast and firm, just in the ball of the joint. It was an hour and forty minutes from the time they began to operate upon him till all was done; it’s perfectly wonderful how one can live after such an operation, but he is doing splendidly. Worst of all is that my doctor went off Thursday and left me with all these important wounds to take care of, and not a person except these stupid men even to help dress. I have felt so anxious and responsible.
Here I have been writing all this and not telling you one word of the excitement around us. For the last week, all sorts of rumours have been afloat of the invasion of Alexandria; preparations have been making all around, rifle pits dug everywhere, arming negroes, mounting batteries and such things, even the bridge made ready to be destroyed at a moment’s notice, and no one permitted to go out of town; but still no one exactly believing, half ridiculing;—till today matters begin to be serious. Rifle pits are dug across all streets leading to the commissary departments, for here lie all the stores for the whole army of the Potomac. Just at the corner of our hospital and just under my window one is dug, and a battery of four guns planted; so, we shall have some shooting (I mean if they come), and since I began to write up comes the orderly, counts out every man in the hospital able to shoulder a gun, and arms them all, so that at a moment’s warning they may be ready.
I don’t feel the least frightened for myself, but it’s horrid to think of these poor wounded fellows and what they would suffer. The town is full of Secesh just waiting for a raid in order to come out openly; and they could fire every hospital at once. I only hope the newspaper reports won’t alarm you at home.
General Clough, the military governor of this place, was in here tonight, and says the enemy are within ten miles of us, but how strong he doesn’t know; of course they are in some force or they would not venture near so many forts as guard this town. Guards are patrolling the streets, and “Halt!” is the continuous cry. I sent a man out for ice tonight, and they snapped him up. I assure you it’s very exciting; of course, much is said that is not true, but there must be some cause for all this fuss. I’m so glad my Secesh men are all disposed of. They’ve been sent to Washington. There are only four in the house now, and those have a guard placed over them tonight. Last night the long roll beat from twelve till two; it sounded good.