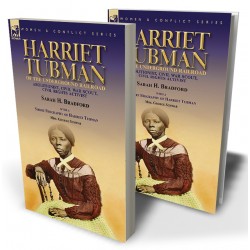 With a Short Biography of Harriet Tubman by Mrs. George Schwab

The life of an African-American icon

Harriet Tubman (born in slavery, Araminta Ross in Maryland in 1822) was a remarkable abolitionist and political activist. She escaped from captivity and subsequently undertook thirteen missions on the ‘Underground Railroad’, risking capture and bondage, to rescue approximately 70 people from their slave-masters. After the introduction of the Fugitive Slave Act in 1850 she guided her charges all the way to Canada to establish them in new lives there. During the American Civil War Harriet volunteered to be a cook and nurse. Such was her courage and commitment to the cause of liberty, that she then became a scout and spy for the Union Army. Notably she guided the raid at Combahee Ferry which liberated hundreds of slaves. In later life she became active in the cause of women’s suffrage—an inspiration to all African-Americans—and her fame rightly endures to the present day. Harriet Tubman survived two husbands, was devoutly religious and died in 1913, at more than 90 years of age, in a residential home for African-Americans she had founded. This Leonaur edition contains two accounts of her life for good value.

It would be impossible here to give a detailed account of the journeys and labours of this intrepid woman for the redemption of her kindred and friends, during the years that followed. Those years were spent in work, almost by night and day, with the one object of the rescue of her people from slavery. All her wages were laid away with this sole purpose, and as soon as a sufficient amount was secured, she disappeared from her Northern home, and as suddenly and mysteriously she appeared some dark night at the door of one of the cabins on a plantation, where a trembling band of fugitives, forewarned as to time and place, were anxiously awaiting their deliverer.
Then she piloted them North, traveling by night, hiding by day, scaling the mountains, fording the rivers, threading the forests, lying concealed as the pursuers passed them. She, carrying the babies, drugged with paregoric, in a basket on her arm. So, she went nineteen times, and so she brought away over three hundred pieces of living and breathing “property,” with God given souls.
The way was so toilsome over the rugged mountain passes, that often the men who followed her would give out, and foot-sore, and bleeding, they would drop on the ground, groaning that they could not take another step. They would lie there and die, or if strength came back, they would return on their steps, and seek their old homes again. Then the revolver carried by this bold and daring pioneer, would come out, while pointing it at their heads she would say, “Dead n——rs tell no tales; you go on or die!” And by this heroic treatment she compelled them to drag their weary limbs along on their northward journey.
But the pursuers were after them. A reward of $40,000 was offered by the slave-holders of the region from whence so many slaves had been spirited away, for the head of the woman who appeared so mysteriously, and enticed away their property, from under the very eyes of its owners. Our sagacious heroine has been in the car, having sent her frightened party round by some so-called “Under-ground Railway,” and has heard this advertisement, which was posted over her head, read by others of the passengers. She never could read or write herself, but knowing that suspicion would be likely to fall upon any black woman traveling North, she would turn at the next station, and journey towards the South. Who would suspect a fugitive with such a price set upon her head, of rushing at railway speed into the jaws of destruction?
With a daring almost heedless, she went even to the very village where she would be most likely to meet one of the masters to whom she had been hired; and having stopped at the Market and bought a pair of live fowls, she went along the street with her sun-bonnet well over her face, and with the bent and decrepit air of an aged woman. Suddenly on turning a corner, she spied her old master coming towards her. She pulled the string which tied the legs of the chickens; they began to flutter and scream, and as her master passed, she was stooping and busily engaged in attending to the fluttering fowls. And he went on his way, little thinking that he was brushing the very garments of the woman who had dared to steal herself, and others of his belongings.
At one time the pursuit was very close and vigorous. The woods were scoured in all directions, every house was visited, and every person stopped and questioned as to a band of black fugitives, known to be fleeing through that part of the country. Harriet had a large party with her then; the children were sleeping the sound sleep that opium gives; but all the others were on the alert, each one hidden behind his own tree, and silent as death.
They had been long without food, and were nearly famished; and as the pursuers seemed to have passed on, Harriet decided to make the attempt to reach a certain “station of the underground railroad” well known to her; and procure food for her starving party. Under cover of the darkness, she started, leaving a cowering and trembling group in the woods, to whom a fluttering leaf, or a moving animal, were a sound of dread, bringing their hearts into their throats.
How long she is away! has she been caught and carried off, and if so, what is to become of them? Hark! there is a sound of singing in the distance, coming nearer and nearer.