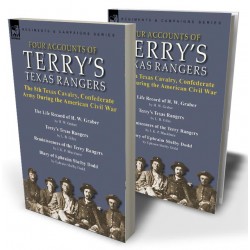 This special Leonaur edition contains four fascinating accounts of the American Civil War as it was fought by the southern men of the 8th Texas Cavalry, known as Terry’s Texas Rangers. This volunteer regiment was assembled by Benjamin Terry in the late summer of 1861. Each man was required to provide his own weapons and equipment—the army supplied his horse. Though elected colonel, Terry’s career was soon terminated when he was killed at Woodsonville, Kentucky in September of 1861. The Rangers went on to fight at Shiloh, Perryville, Murfreesboro, Chickamauga, Chattanooga, the Atlanta Campaign and as raiders under Nathan Bedford Forrest. They also formed part of Johnston’s force in the attempt to slow Sherman’s march to the sea. It is believed that Terry’s Texas Rangers delivered the last charge of the Army of Tennessee at Bentonville in 1865. Notably, the regiment never formally surrendered to the Union and following the collapse of the Southern cause its men simply slipped homewards individually or in small groups. The troopers of this very experienced cavalry regiment became renowned as ‘shock troops’ and were considered collectively the finest mounted regiment in the western theatre of the war. These first- hand perspectives and an historical overview offer essential and comprehensive reading for all students of the American Civil War.