With the Border Ruffians: Adventures With the Rangers on the Western Frontier During the American Civil War and Against the Indian Tribes and Outlaws 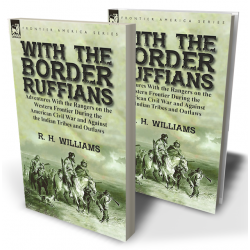 An epic of the wild frontiers in Kansas and Texas

This incredible autobiography of a truly outstanding 19th century adventurer, is made even more remarkable because this young Englishman had experienced adventures all over the globe, before he set foot in North America to embark upon the astonishing, thrilling and dangerous life that is the subject of this book. Williams sailed from Liverpool to the east coast of America in 1852 eager to make his fortune. He spent two years in Virginia before striking out to the untamed Far West. The years 1855-9 saw him in Kansas where he joined the ‘Border Ruffians’, a ranger unit dedicated to bringing outlaws to justice and fighting Indian tribes. After four years Williams travelled to Texas which soon after joined the Confederate cause. There, as a Texas Ranger, he took part in frontier campaigns against Union forces, fights against the hostile tribes of the South-West, including the Comanches, raids into Mexico and, of course, pursuits of the notorious ‘bad men’ of the lawless frontier. At the close of the American Civil War Williams became a cattleman and the reader him on the epic cattle drives of the that made legends of American cowboys. This substantial book, contains insights from personal experience into virtually every aspect of life during the era of the Wild West, and is sure to reward all those with an interest in the period.

It seems they were asked if they wouldn’t like to be moved a little way off into better shade. The poor creatures willingly agreed, thanking their murderers for their kindness. They were carried away, but it was to the shade and shadow of death, for a party of cowardly wretches went over and shot them in cold blood.
This was Mr. Luck’s work—the remorseless, treacherous villain! And I vowed to be even with him for it, if ever I got the chance. Meanwhile I denounced the bloody deed in as strong language as I could use, telling the perpetrator, to his face, what he was, and what every decent, honourable man would think of him as long as he lived. He handled his six-shooter, and looked as though he would like to use it on me; but the coward was afraid to shoot at a live man, as I told him. Fortunately, some of my own comrades backed me up, or I have no doubt it would have gone hard with me; as it was, the scoundrel played me a scurvy trick, and gave me the most awful day’s work I ever did in my life.
I brooded all the rest of that shameful day on the best course to pursue: there was no hope of bringing the murderers to justice, for I felt sure Dunn would uphold them, and that General Wasp would support him. My only chance then was to get out of the company, or to attain such a position in it as would enable me to stop such deeds.
In justice to Cole McCree, who was a brave and kindly man, I should mention that he was severely wounded in the fight, and had no knowledge of the crime committed by Luck and his friends. The latter’s chief motive, I believe, was to prove his zeal and devotion to the Southern cause, and by these base murders make himself popular with the authorities in San Antonio. What their character was, I have already described, and Luck’s idea of how to please them confirms all I have said about them.
Immediately after the fight a couple of the boys were sent off, post haste, to Fort Clark, supposed to be some thirty miles distant, to fetch the surgeon stationed there. Till midnight I was off duty, but after that had to help tend the wounded, some of whom were in great pain; and we had no appliances with which to treat them, nothing much to give them except cold water. I always remember, to the credit of poor humanity, how patiently they bore their terrible sufferings.
It was quite necessary, for the sake of the wounded, and for sanitary reasons, that we should move out of camp as soon as possible. Our own dead were buried in one long trench, but those of the enemy were carried to where the murdered prisoners lay, and there left for a prey to the buzzards and coyotes.
So, the day after the fight we were all busy, making litters for the wounded, packing arms, ammunition, etc., captured in the camp, ready for transport, it being arranged we should set out for Fort Clark at daybreak next morning. My comrade Ojé and I suggested using horse-litters, which we knew all about. But Luck wouldn’t listen to this; nothing would suit him but hand-litters. He had no doubt laid his plans to pay out myself and the comrades who had stood by me in the row, though we had no suspicion of the abominable trick he was going to play us, more especially as he loudly declared he would take his turn at the bearer work with the rest of us.
That night the doctor arrived, and was promptly at work; but several of the cases were very serious, and would not, he said, live to see the fort.
Betimes next morning, the litters, of long cedar poles with blankets laced to them, were ready with their sad loads, and the horses packed with the plunder. Four bearers were allotted to each litter, or thirty-two in all; sixteen of whom, being all that were fit for duty, were taken from our detachment. The mounted men marched ahead with the guide, carrying our rifles, water-kegs, blankets, and everything except water-canteens that we took for the immediate use of the sick. The first stage was to be about five miles; there the mounted party were to halt till we came up, and we were to be relieved by fresh bearers. Louis Ojé and I, with two other men, carried our comrade and friend Mont Woodward, who was desperately wounded.
Wagons and ambulances had been sent out from the fort to meet us, or rather would be so sent, as the nature of the country wouldn’t let them go much more than five or six miles in our direction.
Hardly had we started when one of the horses, loaded with rifles not very securely packed, got scared, or didn’t like his load, and away he went, kicking and plunging and followed by three others. Down the steep hillside and through the thick brush they went, shedding rifles at every stride; and may be going still for aught I know, for we never saw them again, nor the forty rifles they carried between them.
You may also like