Memories of the Dakota Sioux War, 1862: Two Eyewitness Accounts of the Uprising in Southwest Minnesota----Recollections of the Sioux Massacre by Oscar Garrett Wall & Reminiscences of the Little Crow Uprising by Asa W. Daniels 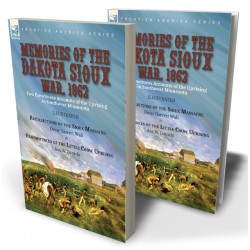 The Indian War fought during the American Civil War

The Dakota Sioux War (also known as the Little Crow Uprising and Little Crow's War, named after the Sioux leader) raged briefly from August to December, 1862 along the Minnesota River. The native Americans had suffered the indignities and privations of broken treaties and promises which inevitably led to violence. It is recognised that Indian Agents were guilty of violations of the law including frauds. Farms and settlements were attacked, most notably at the Redwood Agency, Milford, Leavenworth and Sacred Heart. Fort Ridgely and the township of New Ulm were assaulted and military forces suffered a significant defeat at The Battle of Birch Coulee. Attacks on stagecoach stations, forts and settlements spread into Northern Minnesota before the Sioux were eventually defeated. Hundreds of settlers and soldiers had been killed. Reprisals were brutal including the mass execution of thirty-eight Sioux warriors. This book contains two accounts of those turbulent times. The second very short account has been included in this Leonaur edition since it was considered unlikely to be republished individually.