Forty Years Among the Indians 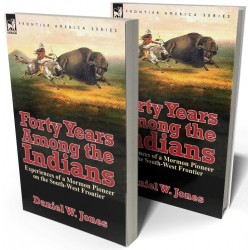 The life of an outstanding Mormon pioneer and Westerner

As the title of this book suggests its author recalls a long period of his life in the American South- West of the nineteenth century commencing from 1847 when, travelling to take part in the war with Mexico as a volunteer, he was attacked by Comanche Indians. His first association with the Mormons, following a shooting accident, followed in 1850. Native American Indians and the Mormons from this point form the interlocking threads of this colourful autobiography. It is clear that the author has much sympathy for the plight of the Indians of his time and had frequent dealings with various tribes. These were, however, often violent times and the book touches upon the Echo Canyon War, the Black Hawk War and Apache outbreaks. Later, as an active member of the Mormon Church, Jones led a rescue of Mormon hand-cart company pioneers which necessitated his party wintering at Devil’s Gate under conditions of extreme hardship. The incident promoted much acclaim as an act of undoubted selfless heroism. Significantly Jones is credited with translation of selections ‘The Book of Mormon’ into Spanish, leading the first Mormon mission to Mexico and the foundation (at Brigham Young’s behest) of a new settlement originally called Jonesville, in the Salt River Valley Arizona which is now incorporated into the city of Mesa, Arizona.