The Ranger & His Wife 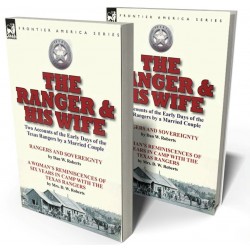 Married life with the Texas Rangers on the old frontier

Accounts of the lives of the Texas Rangers and of the early frontier days of the untamed American South-West are never less than fascinating. This special ‘two-books-in-one’ Leonaur edition is of particular interest because the authors whose works appear within it were a married couple. So the reader has the opportunity to view these essential accounts, which cover an identical time period and touch upon many of the same events, from two closely associated, but different perspectives. D. W Roberts, the Ranger, was born in Mississippi in 1841 though his father had come to Texas in 1836 taking part in the battles for the Republic and the Plum Creek Fight. Roberts was member of Company ‘D’ and saw much action on the Texas frontier of the post-Civil War period, taking part in his first Indian fight in 1873 at Deer Creek. Many more fights with the native Indian tribes of the region followed, though the rangers were also perpetually engaged in hunting down and bringing outlaws to summary justice including the infamous Sam Bass. Despite the unusual title of Roberts’ book, all these experiences are recounted in riveting detail in these pages. Mrs. Roberts’ work is, predictably, of a markedly more gentle and domestic nature. In her writings we learn of the life of a Ranger’s bride, living in camps and of daily life on the frontier for a Ranger’s wife in the latter half of the 19th century. Highly recommended.