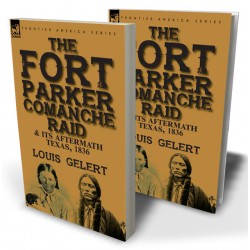 A collection of histories and first hand narratives

There are few more famous or evocative characters in the history of the American south-west frontier period than the Comanche war chief, Quanah Parker. Every student of the period knows that Quanah was the son of an abducted American pioneer girl, Cynthia Parker. This book collects into a single, good value, Leonaur edition six contemporary perspectives on the events that led to the birth and life of Quanah Parker, each of which is too short to be individually published today. Included are two histories as well as personal accounts by James Parker, Rachel Plummer, Cynthia Parker and Robert Carter. The text covers the period from the raid on Fort Parker which brought about the abduction of the nine-year-old, Cynthia Parker to when the adult Quanah was at the zenith of his power and at war with U. S. Army. These accounts, available together for the first time, are primary source material and are thus essential reading for any serious or casual student interested in the subject.