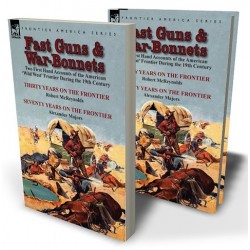 The history of the frontier region of the United States of America in the pre and post American Civil War period—the ‘Wild West’—has always fascinated historians and enthusiasts. This was a harsh, largely uncharted land given to extremes of terrain and weather; a place which attracted hard men on both sides of the law and which was populated by tribes of fiercely independent native Indians who would protect their tribal lands and way of life at any cost. This was also the age of the pioneers, the ranchers, horse-soldiers, lawmen, adventurers, desperados and feather-bonnet crested warriors, all of whom appear in vibrant detail within the pages of this special Leonaur edition. The two titles in this good-value, two-in-one edition are both autobiographies of true ‘Westerners’ who made their lives on the frontier of the 19th century and who experienced it in all its variety, colour and violence. Robert McReynolds began his lifetime of adventure as a very young man and was prepared to make his way by turning his hand to whatever work came his way, from ranching to prospecting; he knew the troubled Black Hills of Dakota well and was no stranger to fights with hostile Indians or outlaws. The second title here, by Alexander Majors, recounts the life of a well known character of the far west and Rocky Mountains. Majors was responsible for bringing freight, stage coach and mail services to this wild region and also for recruiting the young man who became known as ‘Buffalo Bill’ Cody as a daring ‘Pony Express’ rider. Clearly there can be no one better than Majors to recount these thrilling times and his autobiography amply rewards the reader.
Leonaur editions are newly typeset and are not facsimiles; each title is available in softcover and hardback with dustjacket.