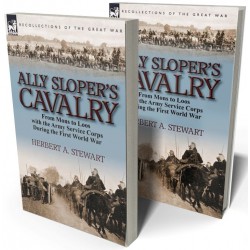 Personal recollections of a little reported unit of the British Army

This book is one of many first-hand accounts written by soldiers about their experiences in the First World War. Originally titled ‘From Mons to Loos’ this gives readers little specific indication of the book’s contents. It of course concerns the period from the outbreak of hostilities in 1914, when the ‘contemptible’ little British Army fought its historic, dogged retreat from Mons, through the epic battles of the Marne and Aisne and First Ypres to the Battle of Loos in 1915. By this time the Western Front had become a stalemate of opposing trenches. However, what the original title doesn’t tell us, is that the book specifically concerns the activities of the Army Service Corps (later the RASC) whose task it was, using horse drawn transport, road and rail, to deliver everything the men in the firing line needed—from bullets to bread. The ASC’s talent for the task led to the affectionate nickname which likened them to a well known cartoon character of the period. This astonishing account—told by one of its officers—of the war ‘fought’ by those British soldiers in Belgium and France who rarely, if ever, pulled a trigger, but who were nevertheless constantly at risk from enemy fire. They were a largely unsung body of men, lacking nothing in courage or dedication to their task, who often gave their lives in the service of their comrades of the fighting regiments and without whom the war would have been impossible to fight. Very few accounts of the ASC exist and Stewart’s book, by virtue of the obscurity of its original title, has been largely overlooked in bibliographies of books about the corps.