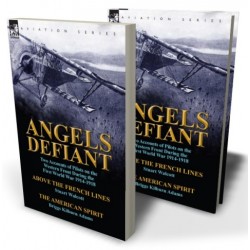 Accounts of the lives of the young men who flew and fought as pilots during the First World War—the first war of the air—are comparatively few in number. All are, of course, interesting and essential for preserving the historical record of these pioneering combat pilots. The rate of mortality among these brave young men was high and, indeed, the two accounts here both concern American pilots who were killed. Walcott joined the French air service and was assigned to Escadrille Spad 84 and was shot down in December of 1917 having gained one victory. Briggs Kilburn Adams’ book is comprised of letters describing his experiences on the Western Front. He enlisted as a volunteer with the American Ambulance Service in France before transferring to the Royal Flying Corps in 1917. He was attached to No. 18 Squadron R. F. C and was killed in March 1918. Each of these accounts is short and this special Leonaur book brings them together in a single, good value edition that allows modern readers to own these vital works of aviation history.
Leonaur editions are newly typeset and are not facsimiles; each title is available in softcover and hardback with dustjacket.

Another chap in an attack on captive balloons, drachens, dove for something like 10,000 feet vertically and with full motor on, thereby gaining considerable speed as you can imagine. He came right on top of the balloon, shot and to keep from hitting it, yanked as roughly as he could, flattening out his dive in the merest fraction of a second. Imagine the strain on the machine! When he got home, all the wires had several inches sag in them; the metal connections of the cables in the struts and wood of the wings had bit into the wood enough to give the sag.
Machines are built to stand immense pressure on the under side of the wings. In some acrobatic manoeuvres I was trying the other day, I made mistakes and caused the machine to stall and then fall in such a way that the full weight was supported by the upper surface—by the wires which in most machines are supposed merely to support the weight of the wings when the machine is on the ground. Yes, the Spad is a well built machine, the nearest thing to perfection in point of strength, speed and climbing power I’ve seen yet. Of course it’s heavy and that’s why they put 150-280 HP in them. The other school, that of a light machine with a light motor—depending for its success on lack of weight rather than excess of power, may supplant the heavier machine in time—I can’t tell. So, as anyone who knows has said right along, there is a long way to go in the development of the J N or even the little tri-plane, before American built planes get to the front. Of the bombing game, I don’t know anything at all.
Yesterday there was a revue here in honour of Guynemer, and decorations for the pilots of the group who had won them. Three Americans received the Croix de Guerre—members of the Lafayette Escadrille. Lufberry, the American ace, carried the American flag presented to the escadrille by Mrs. McAdoo and the employees of the Treasury Department—besides the two aviation emblems of France. He was called to receive his decoration “for having in the course of one day held seven combats, descended one German plane in flames, and forced five others to land behind their lines” (which means that he is officially credited with one, his thirteenth, and that the other five though probably brought down, do not count for him because there were not the necessary witnesses required by the French regulation). Being the bearer of the flag, he was a very worried man to know what to do with the flag when he should go up to get his medal, till one of the fellows in 124 (the Lafayette) came to his rescue.
For a military revue it was decidedly amusing. Aviators are not very military. The chief of one of the escadrilles was commissioned to command the mechanics who are plain soldiers with rifles and steel helmets for the occasion. He is a bit of a down and amused the entire gathering, kidding with the officers. The pilots of each of the five escadrilles were in more or less formation, most of them with hands in their pockets for it was chilly, and presenting a mixture of uniforms unparalleled in its heterogeneity. Every branch of the service represented and endless personal ideas in dress. Because of the occasion, repos has been granted to the entire group for the afternoon, another group taking over our patrols. So that after the revue, everyone had the afternoon to waste—a sunny day which is quite unusual this month. Within a half hour, every machine that was in working order was in the air—forming into groups and then off for the lines, just looking for trouble—a voluntary patrol they call it. Which opened my eyes a bit to the spirit in the French service after three years of war.
Word from Paris that those Americans in the French service who have demanded their release to join the U. S. A. have obtained that release—which probably means that all we wait for now . . . is the commissions.
This afternoon I took another trip with one of the old pilots to look over the sector. We stayed over France and didn’t get into trouble although there were lots of Bodies around. Hope to get really started soon An amusing one this morning: two pilots from the group were on patrol and attacked a single German about two kilometres behind the German lines. They completely outmanoeuvred him, he got cold feet and started for the French lines, giving himself up. The funniest part about it is that the machine gun of one of the attackers was jammed and he couldn’t possibly have hurt the Boche—just had the nerve to stay and throw a bluff. They dome back to camp just before dark this evening, one of them flying the German machine and the other guarding him in a Spad. The machine is an Albatross monoplane (biplane)—finished in silver with big black crosses on the wings and tail—a really beautiful thing. It flew around camp for several minutes before landing. It is the second machine that has been scared down since I’ve been out here.
You may also like