An American Fighter Pilot in the R.A.F 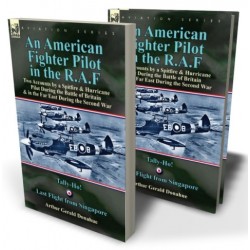 This special Leonaur title, our first ever book about the Second World War, contains two accounts of the war in the air as fought by the fighter pilots of the Royal Air Force. It is remarkable because its author was an American who had elected to join the battle against fascist Germany before his own country decided to enter the war. The combat patrols and dog-fights of Fighter Command’s young Spitfire and Hurricane pilots are brought vividly to life as Donahue describes his part in the momentous days of the Battle of Britain. The second book describes the author’s subsequent experiences in the war against Imperial Japan. A posting eastwards to Singapore put him on the spot just as the Japanese Army was sweeping down the Malayan peninsula to assault the fortress island. Descriptions of war in the air, the ultimate fall of Singapore, his hair’s-breadth escape and his flight to fight another day make riveting reading. Donahue’s two books combined in this value for money Leonaur edition should not be missed by anyone interested in wartime aviation.
Leonaur editions are newly typeset and are not facsimiles; each title is available in softcover and hardback with dustjacket.