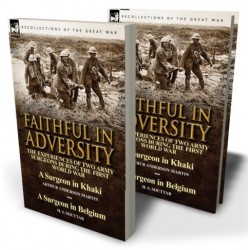 The war of the medical men

This book stands out as distinctive and different among the many other books being published in the centenary year of the outbreak of the First World War, most of which will concentrate on the tumultuous battles of the period. This was war that embraced virtually the whole planet, involved all the people of the combatant nations and employed every resource, knowledge and skill in the war effort. Leonaur intends to recognise the contributions of all people—men or women, soldiers or civilian volunteers, on the battle front or the home front—who were involved in the Great War, and is releasing material covering subjects that may well be absent from the catalogues of most other publishers. Today we take for granted the expert medical staff who support our armed services, but at the time of the First World War, only 50 or so years had elapsed since her concern about terrible conditions in the Crimea brought Florence Nightingale to public notice, and where a wound was a death sentence and disease killed more men than enemy fire. In the Great War, Army surgeons had to cope with tremendous workloads when the weapons of the industrial age inflicted ghastly injuries as they scythed down men in their thousands. This book contains two first-hand accounts—brought together for interest and good value—by British military surgeons, who risked their own lives to save others.
Leonaur editions are newly typeset and are not facsimiles; each title is available in softcover and hardback with dustjacket.