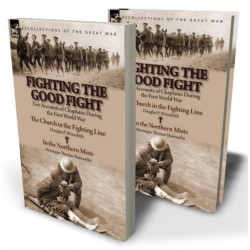 The Cross and the Sword

No one who has served in the military has ever underestimated the value of the important work undertaken by chaplains—those men of the church who donned uniforms and joined the fighting men on campaign. They endured the perils of the battlefield and danger in all its forms to provide spiritual support and pastoral care to soldiers of all ranks. These men brought comfort to the dying and wounded, supported those in physical or psychological distress and helped with simple tasks, such as writing letters to loved ones at home, for the injured and illiterate. The two accounts here recognise the brave men of the church who went into the conflict of the Great War armed with no more than their faith, their Bibles and their humanity. One account concerns an army chaplain’s experiences of the opening stages of the war where the B. E. F, with great loss of life, was rolled back in the retreat from Mons. Winnifrith became the man of the hour when his fellow officers in Smith-Dorrien’s hard pressed command fell and, astonishingly, he had to take command of an infantry brigade. The second account in this good value ‘two books in one’ edition, concerns the activities of a churchman on the high seas of war with the ships and sailors of the Royal Navy.
Leonaur editions are newly typeset and are not facsimiles; each title is available in softcover and hardback with dustjacket.

At the headquarters of the Field Ambulance in Richebourg l’Avoue I chose a corner of a very pretty garden for a cemetery. I buried many here, at the advanced dressing-station, and behind the trenches. One Sunday morning the gunners carried the body of Lieutenant Pollard, R.F.A., to the churchyard at Lacouture and we buried him near General Hamilton. One of the saddest funeral services I took was that over the grave of Sergeant Willie Macdonald, 2nd K.O.Y.L.I. He and his brother were killed on the same day; both had displayed conspicuous bravery, and been recommended for rewards. Willie was brought back to the Field Ambulance in a comatose condition and died soon afterwards. A few of his comrades from the regiment were present at the grave, over which, in spite of a lump in our throats, we managed to sing the beautiful hymn “On the resurrection morning.” He had been a member of my voluntary choir in Dublin, and we all felt, therefore, it was fitting to pay him this small tribute.
One morning I received a telephone message to go out to Lorgies to bury two officers of the Duke of Cornwall’s Light Infantry. I went off at once, but, arrived at brigade headquarters, the acting-brigadier would allow me to proceed no farther because, he said, I should be courting almost certain death. Having given me permission to go out after dusk, I did so in company with our bearers, whom I joined near Neuve Chapelle. The darkness was intense, the mud awful, and shells from our Howitzers flew over our heads with weird shrieks. Numerous sentries challenged us as they stood in the shelter of some dismantled buildings. No smoking was allowed, lest the striking of a match might draw the enemy’s fire. Lorgies was but a heap of smoking ruins, the outer walls alone of the church remained, and the light from blazing corn-stacks and burning dwellings revealed to us the awful devastation of the place. Silent figures moved about carrying rations and ammunition, and the regimental stretcher-bearers passed to and from the trenches on their hazardous work of bringing in the wounded.
One house alone in a long row of dwellings still boasted a roof, and here we found Lieutenant G. D. Eccles, the medical officer of the 1st East Surrey Regiment, busy with the wounded. He looked very weary after his almost ceaseless vigil and constant labours, but cheerfully he addressed me with, “Good evening, padre, glad to see you; what do you think of our quarters? We had a bullet through the back window this afternoon, which passed through a door and landed on the mantelpiece there. In front the road has been shelled most of the day. However, we are fairly safe now as long as we show no light at the back.” With admiration I watched him a while as he went about his work, deftly bandaging the wounded and saying a cheery word to all. I found Lieutenant J. B. Matthews, medical officer of the D. C.L.I, similarly engaged in a ruined house nearer the church.
“The C.O. would like to see you, padre,” he said to me; “you’ll find his headquarters down that road by the burning farm.” Following his directions, I found myself in some of our reserve trenches, where the men bade me exercise care because the Germans were less than a hundred yards distant; and, finally, I discovered the CO., who thanked me for coming and bade the adjutant show me where the graves had been prepared for Captain Passy and Lieutenant Elliott. In the middle of the service heavy riflefire commenced, and the bullets whistled about us; but I went on with the prayers, and most fortunately none of us were hit. By this time our ambulance waggons, which had been compelled to make a second journey, were having the last of the wounded, of whom there were more than a hundred, placed in them, so, after bidding Eccles and Matthews goodnight, I returned with our bearers, and reached my quarters about 1.30 a.m. to find good thoughtful Major Fawcett waiting up to give me some hot tea.
For the regimental medical officers especially I have a great admiration based upon first-hand knowledge of them and their work acquired on many visits to their aid-posts such as the one just described. The heavy casualties among them testify to the dangers they face in their devotion to duty. Not the least trying feature of their work is its isolation; then they are on duty practically day and night, and can only snatch brief and uncertain intervals for sleep in a building out of which they may be shelled at any moment. Captain T. W. Browne (Manchesters), Lieutenant G. D. Eccles (Surreys), Lieutenant J. B. Matthews (D. C.L.I.) and Lieutenant N. F. Hallows (Devons), medical officers in my own brigade, I count among the bravest of the brave.
Then there was Lieutenant Helm, medical officer to the K.O.Y.L.I., who, about this time, had a most trying experience. The farmhouse he was occupying as his aid-post was demolished by shell-fire. He stuck to his patients, took them into the cellar, and was afterwards imprisoned there by the bursting of another shell which killed those whom he was devotedly tending. He was afterwards dug out, though with great difficulty; but what an awful experience! This is but one example, of many which might be given, of the devotion to duty shown under great dangers and difficulties, by the brave men of whom the regiments affectionately speak as their “doctor.”
You may also like