The Legion of Marching Madmen 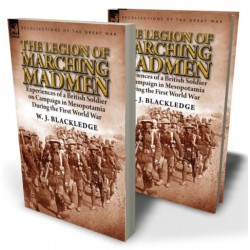 Impressions of the war along the Tigris

The author of this book was well known under several pseudonyms for the writing of military accounts, either based on his own experiences or those of an Australian soldier or legionnaire of the French Foreign Legion. The writing style might seem sensationalist, and that could lead readers to speculate about how much of the narrative is genuine. However, that concern was ever a consideration of the military memoir—regardless of how soberly ‘the facts’ were presented. This account is based upon the authors experiences as a British soldier involved in the Mesopotamia Campaign during the First World War. It includes photographs, including those of the author, so we might assume the account to be comparatively well founded. It is a stark, brutal no holds barred version of the war against the Turkish Army and is, without doubt, an entertaining read for anyone interested in the subject.
Leonaur editions are newly typeset and are not facsimiles; each title is available in softcover and hardback with dustjacket.