Upon the Somme, 1916: Two Personal Experiences of British Soldiers in the Battle of the Somme During the First World War 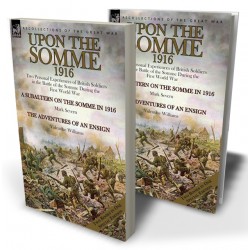 The experiences of two young men in a momentous conflict

The Battle of the Somme, fought in 1916 on the Western Front, became emblematic of the futility of the First World War. This grand attack was intended by the British and their allies to be the solution to the stalemate of trench warfare that had prevailed since the First Battle of Ypres in the winter of 1914/15. Instead, it proved to be yet another failed attempt to break through lines of heavily defended fixed positions. The resulting loss of life for no real tactical—much less strategic—advantage reached new and staggering numbers and revealed the inability of military commanders to deliver a decisive battlefield victory. The year of the publication of this Leonaur book marks the centenary of the Battle of the Somme and in these pages readers will come to understand the battle from the perspectives of two young, British Army officers who experienced it standing beside their men on the front line. Both accounts reward the reader with intimate detail of life in the trenches, with all its discomforts and horrors, together with revealing insights into the thoughts and deeds of the men who went ‘over the top’ into the reaping fire of a battlefield of the industrial age.

The principal duty of the Guards in these trenches, as far as the front line companies were concerned, was to “clean up.” This part of the line had been the scene of a holding attack in the earlier stages of the Somme battle. The troops concerned had done their work, but had not been able to hold the ground gained, and had fallen back to their front line, which had had a regular pounding from the German artillery. The trenches were badly battered and required a lot of repair, the dead bodies were scattered thickly about, and the atmosphere, especially in the warm showery weather then prevalent, was very bad.
So every night parties sallied forth, some to wire, others to repair the parapet, others again to bury the dead and salve the equipment lying about, both British and German. The burial parties had the worst time: you wanted strong nerves to stomach the sights about those trenches. Our Ensign used to see the fruits of these midnight salvage enterprises laid out afterwards in the trench—pay-books and identity discs and rifles and boxes of ammunition and helmets—ready to be sent down to the brigade. Altogether, during the few days they were in that part of the line, the battalion buried several hundred bodies and brought in a very large amount of salvage, for which good service they subsequently received the thanks of their brigadier.
Life was pretty quiet in those trenches. The Hun was having such a desperate struggle to keep his line together where the sledge-hammer blows were being dealt, that in the quieter spots he was only too glad to live and let live. The daily Intelligence Summary showed clearly, on the plain testimony of German Army orders, letters found on the dead, and the less reliable statements of prisoners, that not only was the invincibility of the German Army exploded amongst the very men who had most sedulously spread the myth, but that the German Higher Commands were seriously concerned at the growing demoralisation of the troops, as shown by such significant symptoms as desertions, slackness in patrolling, and the like.
As a scrupulous chronicler of the adventures of our Ensign, I must not overlook a curious experience that befell him one morning in these trenches. Lured by the promise of a perfect dawn, he ventured forth before breakfast to visit the officers in the front line, foolishly omitting to take his Burberry with him. As he was walking down to have breakfast with The Beak and Bryan in the chalk quarry, he was surprised by a drenching downpour of rain. The approach to the front line was very simple—any one of four communication trenches would take you there—but, in his haste to get home out of the wet, our Ensign took a wrong turn and presently found himself in a part of the front line which seemed unfamiliar to him.
Now, out in France, one trench looks very much like another. It was daylight, and the sentries had stood down, and in that downpour every man who was not on duty would naturally take shelter in the dug outs. So our Ensign was not surprised to find the trench deserted, thinking that presently he would come to a sentry who would tell him where he was. He noticed rifles leaning against the firesteps, and boxes of bombs in shelves cut in the parados, and here and there a pack or a mess-tin left outside a dugout. In fact, the trench looked very much as most trenches do in the early morning, after the men have had their breakfast and are snatching a few hours’ sleep.
In places the trench was very battered: at one point a huge gap had been blown clean away, so that he found himself in full view of the German lines. Presently, as he hurried along, with his head down before the driving rain, he began to notice that the trench showed signs of most unusual untidiness. Picks and shovels were lying about all over the place: here a greatcoat had been trodden down into the mud, there a box of small-arms ammunition lay gaping on the ground. Then, even as he realised that the broken fire-bays were void of sentries, and that the trench was deserted, he came to a dead stop. For there, in the bottom of the trench, half a dozen yards from him, a khaki clad figure lay face downwards in the mud.
An eerie sensation crept over our young man. He felt like the hero of that stirring tale of old Clark Russell’s when he boards The Frozen Pirate and finds himself in the midst of an arrested life. For, after stepping gingerly over the prone figure in the mud, he came to a dugout before which stretcher stood. On the stretcher lay a man with head swathed in bandages, and he was dead. So was the stretcher-bearer on the ground beside him, amid a litter of field-dressings. And there were many other dead bodies, besides these two, in that abandoned trench.
Our Ensign faced round and retraced his steps the way he had come, for he was fearful lest he should walk into the German lines if he went any farther. On his return he noticed many little signs that had escaped him in his previous haste,—remains of food spread out on tables in the silent dugouts, old books and newspapers, sodden and mud-stained, some gum-boots lying in a pile behind the trench, a woollen waistcoat hanging on a nail in a ruined shelter; it was a desolate, uncanny place, and our Ensign was glad when he heard the sizzle of bacon and walked into a bombing-post of the Welsh Guards, who were holding the right of his battalion, and was put on his road for home.
You may also like