Tales of a Gaspipe Officer: With the Cyclists on the Western Front During the First World War 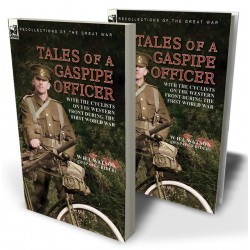 The two wheeled infantrymen of the British Army

Those interested in the First World War on the Western Front and the adventures of the motorcycle despatch riders of the British Army may be familiar with the writing of W. H. L. Watson. The author has also left us a riveting account of tank warfare, which is available in a Leonaur edition. Watson's war was indisputably varied, and in this rare and fascinating first-hand account, which was originally serialised in 'Blackwood's Magazine', he describes his time serving with British mounted infantry who rode into battle propelled by pedal-power. Although the text ends abruptly as though there may have been an intention to continued it, we assure readers that it is complete and is here supported by images which did not appear in the original edition.

(The photograph on the cover cover of this book has been used with the permission of Richie Parsons of Parsons' Period Presentations who appears here in his persona as a private soldier of the Army Cyclist Corps complete with his authentic bicycle of the period.)

So, they started off back again, a little tired and stale. At the Canadian bridge there was more and more high explosive. They rode carefully northwards, cursing on the way some cyclists of another division who were careering madly along on the wrong side of the road. The German shrapnel was still bursting a hundred yards or so to the west of the road. Once more the Gaspipe felt that empty feeling in the stomach, and this time he put it down to fear. He was thinking too much of what would happen if the Germans registered accurately.
He had told the staff that he would make a cottage just opposite the French bridge his headquarters. Fifty yards from it Zouaves were holding a line between the road and the canal. The Germans seemed to be on the other bank, from the noise of the rifles and the fierce singing of their bullets across the road. He heard a little sad sob and then another. Two of the blue figures that had been standing fell to the ground and lay there.
He came to the cottage and, dismounting his men, began to lead them behind it. Suddenly the air was nothing but a sheet of white flame—an unbearable, monstrous crash, as if the world were falling to bits. Something pressed down upon him hard, and then his right leg gave way queerly. He hung on to his bicycle, trembling and stooping. He put his leg to the ground. It was all right, he could walk. Gently he murmured—
“By God, that was near. It does shake one up!”
His bicycle fell from his hand as he turned round and shouted, “All right, Ray?”
There was no answer—only a low groaning and a wee scream. In the sallow light lay a heap of shattered bicycles and men, all muddled confusedly together. He limped into the middle of them.
“Ray, old man, aren’t you all right? What’s happened, Ray?”
There was no answer—only a groan and a wild loud cry—“My leg! My leg!”
Then a man slowly raised himself and stood up, shaking all over and holding his right hand with his left. The blood fell in great drops.
“Here I am, sir—they’ve got us this time. Oh, my hand!”
The correct thing under the circumstances, thought the Gaspipe grimly, is to get these men under cover before another beggar comes along. The road is distinctly unhealthy from (a) shells, (b) bullets.
They searched among the heaps and found a man who had been hit in the head. Very roughly they made him understand what he was to do. Then together, painfully and slowly, they carried the men, one by one, behind the farm and propped them up against the wall. The last time they went out a cow mooed. Both of them started violently—the Gaspipe laughed. He felt almost genial.
“Ray, old sport, our nerves are not what they were.”
Leaving Ray and a Frenchman he had found in charge of the men, he picked up his bicycle and started for the Canadians to find a doctor. He had ridden a little way, when there was a crash behind him. Nearly falling from his bicycle, he pedalled furiously in panic fear to the Canadian bridge. There he waited until a doctor was discovered. After giving the doctor full directions, he turned off again past the Canadian waggons. A parting shell burst in a field beside him.
It was all so melodramatic. How could he report to the division without being melodramatic? But the road was heavy and crowded, and his leg was weak. Near the château he looked towards Ypres. The Great Tower was silhouetted against vast tongues of crude flame. The city was burning fiercely—as if some wrathful god had walked into it and lit monstrous bonfires. There was a rumbling and a clattering, and great distant thuds.