The Green & the Red 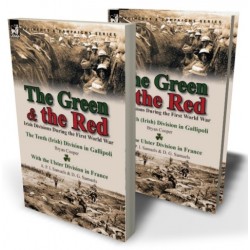 The Shamrock and the Red Hand at War

Divisions of faith, invasions and occupations over centuries, mean that Britain has long had an uneasy relationship with Ireland. The burdens of this have fallen most painfully upon the Irish and their country, for no Irish army ever ravaged English shires. Objective viewers of the history of the two nations might therefore think it peculiar that there have been so many famous Irish regiments within the British Army—with colours carrying outstanding, hard won, battle honours—or that so many Irishmen have readily supported British causes in conflict. The reasons why this is so are many, and important among them is that the ‘Emerald Isle’ gives birth to natural warriors who are among the most enthusiastic and able fighting men on earth. This book, published to coincide with centenary of the outbreak of the Great War in 1914, focuses on the Irish at war from two different perspectives. One account deals with the abortive campaign in the Dardanelles and the fighting in Turkey on the Gallipoli peninsula. It is an account of extraordinary heroism combined with the ribald good humour typical of the ‘sons of Erin.’ The second book concerns the regiments of the Ulstermen of Northern Ireland, descendents of rugged Scottish immigrants, and their hard fought experience of war among the mud, wire and trenches of the Western Front in France.
Leonaur editions are newly typeset and are not facsimiles; each title is available in softcover and hardback with dustjacket.