The Lancashire Lads at War 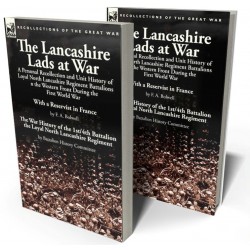 The men of the ‘Red Rose’ county during the Great War

This unique ‘two-in-one’ edition concerns the First World War activities of The Loyal North Lancashire Regiment, a renowned British army county regiment. What makes this book special is that it combines the extremely well written firsthand experience of one the regiments reservists with a battalion history. Bolwell, the author of the personal account, found himself in the battle line very early in the war and as part of the 2nd Brigade of the 1st Division was present in the first engagements of 1914—the retreat from Mons, the battles of the Marne and Aisne, the First Battle of Ypres at the turn of the year as the conflict turned to a stalemate of trenches, wire and mud and then into 1915 and the battles of Festubert and Loos, before receiving the serious wound that ended his military career. The regimental history briefly covers the period of Bolwell’s service but concentrates on the unit raised in Preston and district and sent to the front in 1915. This account describes the fighting on the Somme, Third Ypres, The Menin Road, Cambrai, Givenchy and the final advance to victory and end of hostilities. This is an essential book for anyone interested in the war the British infantry knew or those concerned with Lancashire’s part in the war. Includes an Honour Role and casualty names and statistics of particular interest to genealogists.

On June the eleventh we left for Cambrin to relieve the 1st Brigade, and put two companies in reserve on the left of the road and in rear of Quinchy and one on the right of the road at Maison Rouge, one company being in billets at Cambrin. At Maison Rouge we had a transmitting station to the King’s Royal Rifles, and from the 2nd Brigade Headquarters, the King’s Royal Rifles occupying the front line on the right of the road, nicknamed “Bomb Alley,” on account of its being so near the enemy and continually under bombardment. We used sentries on each traverse to look out for bombs: on seeing one coming and at what position it would be likely to drop, the sentry would yell out “Bomb right,” or “Bomb left,” as the case might be, when the men would at once clear to the opposite direction.
On June the fourteenth we were relieved by the 2nd Division, and left for Bethune, where we went into corps reserve for four days.
On the seventeenth we left Bethune for La Pugnoy, there to rest: whilst here we received a draft of 183 officers and men who had been transferred from a service battalion of the Manchesters, on account of the shortage of our own reinforcements at the feeding battalion then at Felixstowe.
On the twenty-seventh we marched to Cambrin, a distance of about sixteen miles, having our dinner on the road in a thunderstorm; and, on entering the trenches, we received a welcome from the Herts Territorials, who had decorated the fire-step with pieces of chalk (these trenches were of a chalky nature), out of small pieces of which they had built the words: “Welcome to Kitchener’s Army.” Fancy what the reading of that meant to us men, some of whom had been through the war since the very commencement! We did indeed feel grateful, and we had cause to be so, as we were supposed to have gone back to La Pugnoy for a divisional rest and were expecting at least a month, whereas we got only three days of it. Whilst at La Pugnoy several brigades of Kitchener’s Army had passed through us and the 1st Division, those of which occupied the trenches at the time expected to get relieved by them.
However, we had to go, and we were shelled pretty heavily here; we had three companies in the front line, and D Company in reserve. On July the fourth we were relieved from the trenches, after having been in them for six days, and we returned to Salle-la-Bourse. We had then taken over trenches in front of Vermelles, and, after spending a few days at Salle-la-Bourse, we journeyed two kilometres to Noyelles; from there, four days afterwards, we again occupied the trenches for eight days. During this time operations were very calm, and all around the district one could see for some considerable distance—from Vermelles one could see the “Tower Bridge” at Loos; and I often used to gaze at it and wonder when it would become our property, little thinking that my hope would be realized within a couple of months. We did another few days in the trenches, and then went back to Verquin, near Bethune. The observation balloon used to go up here at the back of the village, and on several occasions the enemy shelled it, but never succeeded in hitting it.
On July the twentieth we were again at Noyelles, and on the twenty-third of that month I obtained leave for the purpose of proceeding to England for eight days, after having been on active service for a period of nearly twelve months. I had nearly ten miles to walk, fully equipped, to the railway station to get my train. I need not describe my brief visit home; needless to say I enjoyed myself never better in my life.
Arriving back at Bethune on August the first, we learnt from headquarters that the regiment were in the trenches at Vermelles, and, on arrival at that place, we were just in time to see the Battalion relieved, and had to march back that same night again to Bethune, where we spent eight days, the division holding a horse-show and sports.
From the eighth of August until a fortnight before the Battle of Loos we took our turn, with other regiments in the brigade, to go into the trenches; and a fortnight before Loos we returned to Lozingham to rehearse the coming battle. While at Lozingham we did battalion training, and generally prepared ourselves.
I had become somewhat run down and felt fairly bad with sickness, etc.; when the doctor examined me he found I had a temperature of over 100. He asked me where I felt ill, and on my telling him, he said: “You ought to be admitted to hospital, but I’m afraid I can’t do that, as you are a signaller and we are short of signallers.” He told me to lie down in my billet and rest. I was like this for nearly a week, and did not feel much better at the end of that time; but, as we were again on the move, I did not trouble him any more.
It was on September the twenty-first that we moved to Marles, a village one kilometre from Lozingham. On the twenty-second we marched to the trenches at Vermelles in readiness for the battle, arriving there at 3 a.m. on the twenty-fourth, throughout which day we were busy teeing in wires, etc., in readiness for our run to the German lines on the morrow.