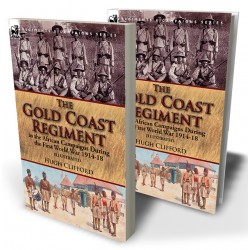 A famous African regiment during the Great War

The First World War was, of course, principally fought in Europe. The established European nations had by the turn of the 20th century expanded their influence across the globe, thus gaining advantages in commerce and colonisation, Germany, comparatively new to nationhood, was a late comer to global imperialism but nevertheless maintained colonies in the wider world particularly in west and east Africa. When war broke out the forces in the colonies of both sides which had hitherto lived as neighbours now became enemies. Both Germany and Britain recruited troops from local populations and the subject of this book, the Gold Coast Regiment, were among them. The Gold Coast (now Ghana) in West Africa, together with Nigeria, provided excellent, strong, resourceful soldiers for the British Empire. It was logical that these troops would be most effective in African campaigns and the Gold Coast Regiment was accordingly dispatched to fight in the Cameroons and in the campaigns in East Africa. There they did fine service in actions which are described in detail in these pages. The side-show theatres of the Great War have always been of special interest to students of this period and so this book is essential reading on the subject. Contains maps and illustrations not present in original versions of this text.

Though it was hardly anticipated that B Company would be called upon to take part in the action, Captain Methven sent out one native non-commissioned officer’s patrol to supplement Captain Buckby’s patrol which, earlier in the day, had been dispatched to the river on the south of the position, and he also established a picket of ten men, under Colour-Sergeant Naylor, to guard B Company’s left flank. At dusk he went forward to this picket with ten more men to see how the former was faring, and to tell them that they would have to remain for the night in the shallow excavations which they had made. Just as he reached them one of the men of the picket drew attention to considerable commotion in the bush in the direction of the river, and presently an irregular line of men was seen to be scuttling through the trees and underwood.
In the uncertain light, the impression at first formed was that they belonged to the King’s African Rifles. One of them was carrying a machine-gun on his shoulder, which he set up with extraordinary quickness, and forthwith opened fire at Captain Methven, at a range of not more than thirty yards. He missed him, however, and the men of B Company, who were squatting down barely a hundred yards away, and who, clumped together as they were, presented at that moment an absolutely fool-proof target, were able to fling themselves flat upon the ground and to crawl into a line, whence they opened a hot fire upon the advancing enemy over the head of Captain Methven and his picket of twenty men.
Darkness was now falling, and the movement of the enemy presently developed into a strong attack, the object of which was to outflank the British left, and to work in to the rear of the positions on the ridge. In this attempt he very nearly succeeded, and might well have done so had it not been for the prompt action taken by Major Shaw, who, with A Company, was a hundred yards or more further down the road than the spot occupied by B Company. He rapidly deployed the men under his command, having in the darkness practically to assign his place to each individual, and he in an incredibly short time joined his line up with that formed by B Company, thus presenting a united and continuous front on the British left to the enemy’s determined and well-timed counter-attack, upon which A and B Companies now poured a heavy and sustained fire. The section of I Company which, with one machine-gun under the command of Captain McElligott, had dug themselves in earlier in the day on what was now the left of the enemy’s line of attack, also came into action with great effect.
Meanwhile Captain Methven’s picket had been joined by both the patrols that had been posted near the river, they having contrived to evade the advancing enemy, The little party, however, had a very hot time of it. From their rear, B Company was firing over their heads with machine-gun and rifle. Ahead of them, less than fifty yards away, the enemy was in considerable force and was busy with rifles and machine-gun; while the men of the picket, exposed to this double fusillade, and being compelled to lie as flat as they could to avoid British, no less than German, missiles, threw the bombs, with which some of them were provided, with a wonderful recklessness that caused many to explode in a manner more dangerous to their friends than to their opponents.
The fire, too, was very rapid, and its maintenance was essential if the picket were to avoid being rushed and overwhelmed by the enemy; yet it presently became evident that the supply of small-arms ammunition in the men’s possession would speedily become exhausted. No one with the picket, except Captain Methven, knew precisely where the Headquarters of the regiment had been fixed, or could undertake to strike it in the dark; so Captain Methven decided to attempt to find it himself. It was a really desperate venture to try to make one’s way through the scrub, with the enemy firing from in front and B Company blazing away from the rear, but Captain Methven crawled and crouched and ran, now on his feet, now on all-fours, tearing his way through the underwood and scratching and bruising himself from head to foot until, luck befriending him, he contrived to reach headquarters. Here he procured some boxes of ammunition, and managed to impress a couple of Mendi carriers, with whom, dragging a box of ammunition in each hand, he returned to the picket by the perilous route whereby he had left it.
It was a gallant deed dashingly done, and it saved the picket; and the prompt action taken by Major Shaw, combined with the pluck and steadiness of the men of B Company, prevented what might well have been an enemy success of some magnitude. On this occasion Corporal Bila Busanga especially distinguished himself by his steadiness and courage, and by the admirable manner in which he kept the men together. As it was, the attack was beaten off at the end of an hour; a perimeter camp was formed; and the night passed without further incident.
Considering the character of the fighting, and the confusion caused at dusk and in the darkness by the enemy’s attack upon the left flank, the casualties sustained by the regiment on this day were light. They amounted to 1 soldier and 2 carriers killed, 21 men wounded, of whom 1 shortly afterwards died, and 13 carriers wounded.