The Liverpool Rifles at War, 1914-18—The History of the 2/6th (Rifle) Battalion “The King’s” (Liverpool Regiment) 1914-1919 by C. E. Wurtzburg and an Account of the Battles of Messines, Passchendaele and Cambrai by Charles Cruttwell

Home » Non Fiction » First World War » Regiments, Brigades and Divisions » The Liverpool Rifles at War, 1914-18—The History of the 2/6th (Rifle) Battalion “The King’s” (Liverpool Regiment) 1914-1919 by C. E. Wurtzburg and an Account of the Battles of Messines, Passchendaele and Cambrai by Charles Cruttwell 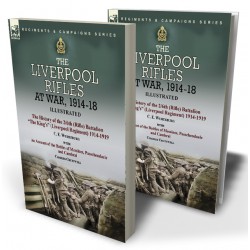 This First World War, British Army battalion history provides an overview of the activities of the Liverpool men on the Western Front. Although the battalion was formed in 1914, it remained in England until 1917, so its combat history is inevitably confined to the latter stages of the war. Part of the 57th (West Lancashire) Division, the ‘Rifles’ took part in all the fighting undertaken by that division from February 1917 to the end of hostilities. The battalion revealed its offensive spirit in the Third Battle of Ypres, the breaking of the Drocourt- Queant switch of the Hindenburg Line, the Battle of Cambrai and the capture of the French city of Lille. It spent long periods of time engaged in trench warfare and suffered in the gas attack on Armentieres. This book will be of especial interest to genealogists since it contains a nominal roll of 4,000 regimental names with details of those who were killed in action, or died of wounds and disease. To give the regimental history broader historical context this unique Leonaur edition contains Cruttwell’s overview of the battles in which the battalion was notably involved including Messines, Passchendaele and Cambrai. The book contains photographs and maps some of which were not included in the principal work.

The orders were that the Hendecourt—Bullecourt road was not to be crossed till 5.15 p.m. Just at this moment as the companies were moving to cross this road an aeroplane came over, flying very low, and immediately afterwards the enemy artillery opened out on Crux Trench and the road with 5·9’s and gas shells, causing many casualties to both “B” and “C” Companies, including many N.C.Os. The aeroplane also fired several belts of ammunition at the men as they lined up.
In spite of this bombardment, the companies moved steadily to their appointed positions, and were ready at 6 p.m., and great credit is due for this to their platoon commanders. Just before zero (6.5 p.m.) the barrage of the right division (52nd) opened, which caused the enemy to drop a protective barrage on our front also. Luckily, this fell about 100 yards in rear of our companies, and no harm was done. At 6.5 p.m. our artillery opened on the barrage line for three minutes, during which period the two leading companies (with two platoons in front and two in support) advanced through the 8th K.L.R. and moved forward with sections in “worms” up to the barrage. This at zero plus three minutes moved forward at the rate of 200 yards in eight minutes, settling down finally for ninety minutes on the German side of our objective, Emu Alley and Wolf Trench, the far side of Riencourt.
The moment the barrage lifted the enemy opened on our forming-up line, shortening from time to time, but so well did our men keep up to our own barrage that the enemy’s was always behind us.
The first opposition was encountered by the right platoon of “C” Company, who were held up by heavy machine-gun fire. The supporting platoon at once commenced an enveloping movement, which apparently disheartened the foe, as the post retired into a dug-out, out of which they were bombed, and the survivors made prisoners. “B” Company then advanced again with three platoons in front, though as progress was made sections darted off to deal with individual posts. “C” Company encountered little opposition till they approached the west edge of the village, when our own barrage, unfortunately, came back 200 yards, causing considerable casualties. A third platoon was accordingly sent forward to reinforce, and just at this moment heavy machine-gun fire was opened from the sunken road. No. 6 Section promptly dashed forward and successfully dealt with this nest of machine-guns, when the company proceeded to deploy and move through the village, “B” Company continuing the line from the southern part of the village to the brigade boundary.