Machine Gunners on the Western Front 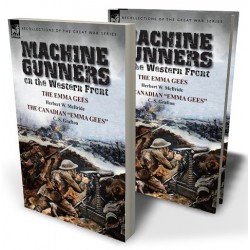 Machine Gunners in the trenches

The First World War was waged on an industrial scale, utilising every conceivable advantage of invention and technology. Fought on land, in the skies and on and beneath the sea it was the first true conflict of the modern age. In the land war infantry soldiers were introduced to efficient artillery, poison gas, the flame thrower, the tank and the devastatingly simple killer that was the barbed wire entanglement. Development in firearms had advanced, by comparison, quite slowly and soldiers were still mostly armed with single round firing weapons. However, the invention of the Maxim gun fundamentally changed the nature of war as infantrymen knew it. First proven by the British army against the Matabele warriors and then decisively against the Mahdists at Omdurman in the 1890s, here was the new monarch of close contact conflict. Men would no longer need to been aimed at to be shot, but would be scythed down in numbers by rapidly fired streams of bullets and every army immediately adopted the machine gun of necessity. This book contains two outstanding accounts of the Canadian army’s machine gun corps on the Western Front. Known as the ‘Emma Gees’ (MG—the initials of machine guns) these men not only dispensed death but due to their tactical importance were the focus of enemy assault. The first book in this special Leonaur two-books-in-one edition is a very personal account by a serving gunner at the sharp end of conflict; the second book, written by another machine gunner, also provides for the reader historical context in the form of an invaluable unit history.
Leonaur editions are newly typeset and are not facsimiles; each title is available in softcover and hardback with dustjacket.