The Tale of a Trooper: a Classic Account of the New Zealand Mounted Rifles During the First World War 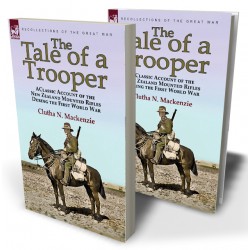 A mounted rifleman's war against the Turkish Army

Several accounts of the famous Australian mounted infantry, the Lighthorsemen, are well known and highly regarded. Far fewer accounts exist concerning their counterparts from New Zealand, the Mounted Riflemen, who served during the same campaigns during the First World War. This account by Clutha Mackenzie, a trooper in the Wellington Mounted Rifles, notably follows 'Mac', its principal character, through the deployment of his regiment in Egypt to the landings and gruelling battles of the disastrous Gallipoli Campaign, conceived to force the narrow Dardanelles Straits to expedite the assault on the Turks in Istanbul. Mac fought in the trenches until the night battle at Chenak Bair, during which he was wounded and subsequently evacuated. This is an invaluable account of New Zealanders at war that gave birth to the legend and spirit of Anzac.

About nine o’clock, heavy, ominous thunder-clouds came rolling silently in from the west. Lightning played in fitful dashes. Then followed swirling wind gusts, which stirred up fantastic columns of whirling dust, roared down the ravines, and raised a surf which grated furiously on the shingle below. Thunder crashed and bellowed, and the whole weird fantasy of crag, cliff and cyclonic dust columns was terribly and wonderfully lit by the vivid and almost continual flashing of the lightning.
Not content with the inferno of nature, the enemy chose this mad moment to add his artillery to the cataclysm, and turned a merry whizz-bang battery on to the Top. For an hour the racket lasted, and then fell in gradual diminuendo; and Mac thought of sleep notwithstanding vermin, dust and shrapnel. It was not to be. A fatigue party was wanted immediately. A number were told off. Warmly and extensively apostrophising the originators of this nocturnal expedition, they gathered up their rifles, bandoliers and water-bottles and wandered protestingly off uphill.
Arrived in the front fire-trench, they were directed to set about roofing bomb-proof dug-outs, in place of another party which was too tired to continue. The new arrivals, who had been working hard for three nights in succession, were righteously indignant, and also considered themselves too tired to carry on. Only two or three enthusiasts showed any inclination to work, and these were speedily discouraged by a further increase of activity on the part of the enemy artillery. Seventy-five m. m. whizz-bangs shrieked low over the surface, or burst with shattering crashes which shook down avalanches of earth on the heads of the troopers as they sat, half-asleep, against the dug-out walls.
Then the machine-guns joined in the din, and rattled and roared in spiteful bursts, now rising into a furious storm, now lulling slightly. The bullets whipped and whizzed past, or plopped into the heaps of debris above. Now that there was sufficient military reason for laziness on his part, Mac, recognizing, of course, that he would have worked had it been at all possible, sank with an easy conscience into somnolence.
When he awoke it was broad daylight, and the tornado of his last sleepy moments of consciousness had diminished to the usual spasmodic rifle reports. He stood up, ruefully rubbed the spots where ammunition pouches had made dents in his person, stepped over his still sleeping cobbers and crawled through the rabbit-hole entrance into the fire-trench. There he blinked like a sleepy owl, more with surprise than anything else.
There were dead Turks all over the show, and in a sap, opposite, were dozens of them. This was a sap which had kept Mac occupied for many nights recently. It was a secret sap, or supposed to be so as far as the enemy was concerned; and had been constructed with every care and precaution to that end. Running parallel with the Turkish front firing-line, thirty yards away, it connected a corner of the Anzac firing-line with the edge of a cliff a couple of chains to the left, and thus cut off a big bend in its front line.
With much satisfaction a light horseman gave Mac particulars of the occurrence: