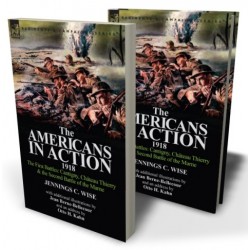 The American drive towards victory on the Western Front

This unique Leonaur book brings together ‘The Turn of the Tide by Jennings Wise,’ an excellent history of some of the decisive battles fought by American forces on the Western Front in 1918, and the separately published portfolio of first-rate illustrations of the American Expeditionary Force in action during that period by Jean Berne-Bellecour. By the end of 1914 the die was cast in Europe for a war of stalemate on the Western Front. Inevitably generals on both sides sought battlefield solutions, but the lines remained almost static, with the armies grappling over entrenched positions of barbed-wire fringed mud. Inevitably the realisation came that this was a true war of attrition. There would be no decisive manoeuvre and the outcome would be determined by which nations would run out of men, materials and food first. Germany could see how the allies depended upon supplies from the United States of America and deployed its U-Boat wolf-packs to the Atlantic Ocean to disrupt shipping. By 1917 this strategy was close to success and the allied cause was in jeopardy. There can be little doubt that American entry into the war was the key to Allied victory. Both men and materials arrived, crossing the ocean protected by the might of a naval presence that only the USA could now muster. After three years of neutrality, the Americans—it has to be said—came not to fight the war, but to win it. This was an industrial war as no previous war had been, and this book traces the fiercely contested battles that became iconic for the Americans who served in Europe. Here are the battles of the summer of 1918 including the taking of Cantigny, the battles of Chateau Thierry and the famous Belleau Wood, Hill 204 and the counter-offensive which was the Second Battle of the Marne. This book includes many battlefield maps to assist the modern reader.
Leonaur editions are newly typeset and are not facsimiles; each title is available in softcover and hardback with dustjacket.