John Buchan’s History of the Battle of the Somme, 1916 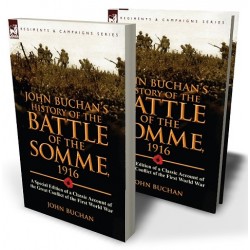 A fine author’s view of the Great Somme Offensive

For many years there were few more highly regarded histories of the momentous Battle of the Somme, 1916, than that written by John Buchan, the renowned author of ‘The Thirty Nine Steps,’ ‘Greenmantle,’ ‘Huntingtower’ and many others. In both his fiction and non-fiction Buchan had the ability to craft a fine narrative in an easy going, economic style. Today Buchan is far less well-known for his non-fiction than for his fiction and that, perhaps, is inevitable. Nevertheless, he was responsible for a very substantial multi-volume history of the First World War which his consummate skill as a writer has ensured remains readable, often quoted and relevant. There were several versions of Buchan’s ‘Battle of the Somme’ published during and soon after the First World War, sometimes in several volumes each dealing with different phases of the battle. This unique, never before in print, Leonaur Original, brings together all the text and all the illustrations and photographs from those various editions to create, what we believe to be the definitive version of the book. Fought over a period of nearly five months, between July and November of 1916, the Battle of the Somme became one of the defining battles, both of world history and the First World War. Over 1,000,000 men were killed or wounded in the course of the fighting which has made it, because of its inconclusive outcome, emblematic of the lives wasted during the war and of the implied incompetence of military commanders throughout the conflict.

On Friday, 18th August, came the next combined attack. There was a steady pressure everywhere from Thiepval to the Somme. The main advance took place at 2.45 in the afternoon, in fantastic weather, with bursts of hot sunshine followed by thunderstorms and flights of rainbows. On the left of the front the attack was timed for 8 a.m.
South of Thiepval, in the old German first line, was a strong work, the Leipzig Redoubt, into which we had already bitten. It was such a stronghold as we had seen at Beaumont Hamel, a nest of deep dugouts and subterranean galleries, well stocked with machine guns. As our front moved east to Pozières and Contalmaison we had neglected this corner, which had gradually become the apex of a sharp salient. It was garrisoned by Prussians of the 29th Regiment, who were confident in the impregnability of their refuge. They led an easy life, while their confederates on the crest were crowding in improvised trenches under our shelling. Those not on duty slept peacefully in their bunks at night, and played cards in the deep shelters. On Friday, after a sharp and sudden artillery preparation, two British battalions rushed the redoubt. We had learned by this time how to deal with the German machine guns. Many of the garrison fought stubbornly to the end; others we smoked out and rounded up like the occupants of a gambling-house surprised by the police. Six officers and 170 men surrendered in a body. In all, some two thousand Germans were caught in this trap by numbers less than their own. There was no chance of a counter-stroke, for we got our machine guns in position at once, and our artillery caught every enemy attempt in the open.

Elsewhere on the front the fighting was harder and less successful. In the centre a famous division pushed closer to Martinpuich, and from High Wood southward we slightly advanced our lines. We also carried the last orchard in Longueval, and pressed towards the eastern rim of Delville Wood. Farther south we took the stone quarry on the edge of Guillemont after a hand-to-hand struggle of several hours, but failed to hold it. Meantime the French carried the greater part of Maurepas village, and the place called Calvary Hill to the south-east. This last was a great feat of arms, for they had against them a fresh division of the Prussian Guard (the 2nd), which had seen no serious action for many months.
We were now fighting on the watershed. At Thiepval we held the ridge that overlooked the village from the south-east. We held all the high ground north of Pozières, which gave us a clear view of the country towards Bapaume, and our lines lay 300 yards beyond the Windmill. We had all the west side of High Wood and the ground between it and the Albert-Bapaume road. We were halfway between Longueval and Ginchy, and our pincers were encircling Guillemont. At last we were in position over against, and in direct view of, the German third line.
The next week was occupied in repelling German attempts to recover lost ground, and in efforts to sharpen still further the Thiepval salient and to capture Guillemont. Thiepval, it should be remembered, was a point in the old German first line on the left flank of the great breach, and Guillemont was the one big position still untaken in the German second line. On Sunday, the 20th, the Germans shelled our front heavily, and at about noon attacked our new lines on the western side of High Wood. They reached a portion of our trenches, but were immediately driven out by our infantry. Next day, at High Wood and at Mouquet Farm, there were frequent bombing attacks which came to nothing. On Tuesday, 22nd August, we advanced steadily on our left, pushing our line to the very edge of what was once Mouquet Farm as well as to the north-east of it, and closing in to within 1,000 yards of Thiepval.
The weather had become clearer, and our counter-battery work silenced some of the enemy’s guns, while our aircraft fought many battles. We lost no single machine, but four enemy airplanes were destroyed and many others driven to the ground in a damaged condition. A sentence in a captured letter paid a tribute to the efficiency of the British airmen:
“The airmen circle over us and try to do damage, but only enemy ones, for a German airman will not try to come near. Behind the front there is a great crowd of them, but here not one makes his appearance.”
Throughout the whole battle there was no question which side possessed the ascendancy in the air. Captured documents bore continual witness to our superiority. One corps report described our air work as “surprisingly bold;” another, emanating from an army headquarters, suggested methods of reorganisation, whereby “it is hoped that it will be possible, at least for some hours, to contest the supremacy in the air of the enemy.” Here is the record of the doings of one flight-lieutenant, who encountered a detachment of twelve German machines.
“He dived in among them, firing one drum. The formation was broken up. Lieutenant —— then got under the nearest machine and fired one drum at fifteen yards under the pilot’s seat, causing the machine to plunge to earth south-east of Baupaume. Shortly afterwards some more hostile aeroplanes came up in formation. Lieutenant —— attacked one, which went down and landed in a gap between the woods. Several other machines were engaged with indecisive results, and, having expended all his ammunition, Lieutenant —— returned.”
This was on 1st September, when partridge shooting begins. Lieutenant —— took the day’s work as calmly as if he had been tramping the stubble.
Books from this set
You may also like