The Campaign Diary of a French Infantry Officer During the First World War from Champagne to the Argonne, 1915 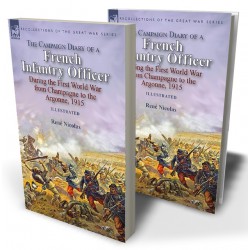 Experiences of a French lieutenant

This book is a valuable and authentic first-hand account of service in the Great War on the Western Front, recorded by a young French infantry officer in his diary, which he informs us bears the marks of war—bloodstains, smears of mud and ‘from cover to cover, a hole made by a tiny piece of steel’. When war broke out the author was a university student, but before long he found himself fighting on the ‘barren plain known as la Champagne Pouilleuse’. In the spring of 1915, after months of skirmishing with the Germans in the mud of Champagne, his regiment left the trenches to campaign in the Forest of the Argonne. In May, he was once more in the west before Arras for the Artois Offensive. There he was seriously wounded, falling only ten yards from the enemy trench. The horror of that attack and his nightmare attempt to return to friendly lines are graphically recounted in these pages. The action earned him the Croix de Guerre. This Leonaur edition contains images and photographs which were not present in the original edition.

“Quick! Quick!” I commanded. “Reverse the trench!” In other words, pierce several loopholes and turn the German machine-guns against their own trenches. We stopped up the communication trench, and opened up the ones toward the rear, and the prisoners filed through my former trench, which was once more a communication. We then prepared to ward off the counter-attack. Barbed wire was brought and securely fastened. The Germans proceeded to treat us to reprisal fire, which damaged our newly conquered trench rather badly, but did little real harm.
I lost nine men in all, four killed and five wounded. The Germans had been neatly outwitted. By quarter-past eleven we were established in our new positions. These events had lasted but a very few minutes—the hand-to-hand fight just long enough to let me kill two Germans.
Nevertheless, the situation was none too cheerful. German corpses were all about. Our grenades had done their work well, and any wounded were drowned in the mud as they fell. As we walked, the bodies sank in deeper, for the bottom of the trench was literally covered with them, forming a sort of carpet under our feet. In spite of it we were radiant. The commander expressed his satisfaction. The counter-attack might come at any moment, but we were ready for anything; as for shells, we laughed at them. Everyone gathered trophies. I carried off the revolver and field-glass of my oberleutnant, also his notebook, which I proposed to decipher and hand over to the staff officers.
Night fell gradually. The air was very sharp, and it began to rain again. We all looked like Capuchin friars with our blankets wrapped around us and our tent-sheets over our heads. No one could sleep, or rather, no one was allowed to sleep; but as I made my way with great difficulty back and forth in the trench, I saw several men asleep, holding their guns at the loopholes. In order to keep them awake I made them fire salutes. The bombardment was intense all night, but it was directed more especially against our second lines. That augured a counter-attack for the next day. At midnight word was sent that we should be relieved at 2 a.m. Great rejoicing. At last we should be able to get some sleep! Quickly we folded blankets and tent-sheets, but we had a long wait in the rain that was falling and under the shells that were dropping.
It was not until daybreak that the others came to relieve us. And then began anew the fight with the mud. It took us nearly two hours to reach Perthes. There we learned that we were not to be sent to recuperate, but were to reinforce the third line in the fortified dugouts of Hill 200. Then we left the communication trenches, for they were in too bad a state, and walked in the road, almost in the open. A rather high parapet protected us from bullets and from being seen by the Germans, who were about a kilometre to the north. But we had to march bent double, alternately making rapid leaps and stopping. Of course, a few bullets came our way, but the Boches did not see us and we were not molested. Once when we stopped, I saw stretched out in the road beside me a dead soldier, with his pipe still in his mouth. Evidently, he had not suffered much.
After five hundred metres on the road we had to go into the communication trench again; that is to say, begin to flounder through the mire. A big German shell had fallen into the trench without bursting, and we were obliged to climb over it. Dangerous engines those, that a mere trifle may cause to explode. I wonder now how we managed to keep going for another hour, for it seemed at every step that we should sink in our tracks. It had been impossible to send up rations, and we had nothing to drink. Some of the men suffered so from thirst that they scooped up in their hands the muddy water that was lying stagnant in the trench and quaffed it with delight. I had a flask of mint and I drank a swallow that refreshed me greatly. We were so tired at the last that we could neither see nor feel, but stumbled on with our eyes shut, some of the men asleep as they went. At last we arrived.