With the First Aid Nursing Yeomanry 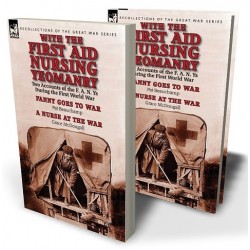 The First Aid Nursing Yeomanry was a female organisation formed in 1907. Its aim was not only to provide competent first aid on the battlefield put also to train its members to effectively operate and live independently and be able to transport the wounded to field hospitals. So F. A. N. Y nurses were skilled drivers or horsewomen and were often more than usually skilled in outdoor pursuits—such as camping—something that differentiated them from normal nursing staff. When the First World War began the organisation immediately volunteered itself for service on the continent, but was initially rebuffed by the British military establishment who, in the spirit of the times, believed a woman’s place was at home and not at war. However, the Belgian and French authorities welcomed them with enthusiasm and the F. A. N. Ys became essential to allied servicemen both as medical carers and as ambulance drivers. Before long the resourceful women of the organisation, as well as providing their first aid and ambulance services, were running hospitals, soup kitchens and canteens and couriering food and clothing to the front lines. By 1915 the British army command came to recognise the value of these indomitable woman and began to work more closely with the organisation and by 1916 F. A. N. Ys were working in the field as mechanics. Old prejudices had been broken down as a matter of necessity and there can be little doubt that the activities of the First Aid Nursing Yeomanry—and similar women’s organisations—them did much to erode prejudices and contribute towards the cause of women’s suffrage. This special Leonaur edition, released to mark the centenary of the outbreak of the First World War in 1914, combines two remarkable books for reader interest and good value. Each contains a first hand account by a F. A. N. Y serving on the Western Front, and both illustrate not only the incredible work these women did under the most dangerous circumstances, but also provide testimony to the resolution and courage of those who would change the status of women in western society forever.
Leonaur editions are newly typeset and are not facsimiles; each title is available in softcover and hardback with dustjacket.