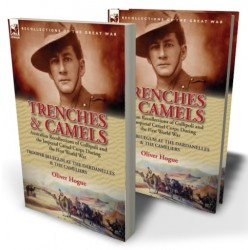 Australian author and journalist Oliver Hogue (sometimes writing as Trooper Bluegum) joined the Australian 6th Light Horse during the First World War and was commissioned. Light Horse regiments were mounted infantrymen and some of the most outstanding soldiers of the conflict—expert horsemen, invariably fine rifle shots and tough, resilient individuals used to living from the land—were well suited for military campaigning. Their camaraderie, informality with authority, dashing uniform (complete with feathered bush hat) and outstanding performance on the field of battle won them huge respect which endures to the present day. Always intended to be utilised as mounted troops, the Dardanelles adventure saw light horse regiments stationed in Egypt surrender their mounts to be transported to Gallipoli where they would fight in futile trench warfare against the Turks—which cost the lives of many of them and gave birth to a legend. Returning to the campaign in Egypt and Palestine, the light horsemen reclaimed their horses, but the desert also demanded another mount more suited to its arid and difficult terrain. So was born the Imperial Camel Corps, the ranks of which were mostly filled with Australian volunteers. Oliver Hogue has left posterity two valuable and entertaining accounts of his experiences in both of these campaigns which gave rise to the spirit of ANZAC. An essential edition for anyone interested in this fascinating period of history or the in the story of Australians at war.
Leonaur editions are newly typeset and are not facsimiles; each title is available in softcover and hardback with dustjacket.

We ourselves had seen a ship go down. We saw the Triumph torpedoed. We saw her shiver from stem to stern—and then go down in the sea. She was a triumph of man’s handiwork, and man’s handiwork had destroyed her. The sea was very calm, but submarines and mines lurk in still waters as well as rough—and out of the calm sea came the thing of death. From the moment she was struck till she turned turtle but fourteen minutes elapsed. A dozen launches and torpedo boats rushed to rescue the crew, and all were saved except about forty. And we who saw it all from the trenches looked on at it stupefied. With a mighty lurch—as it were a giant in the agonies of death—the Triumph heeled over and was gone.
Such things are done, and will be done, as long as there are Hymns of Hate in the world. War is a gruesome business.
Just as I walked out of my dugout this morning two men were shot by a machine-gun not ten yards off—one in the shoulder and the other in the eye. Two seconds ago a big shrapnel shell burst right in front of our dugout. The bullets flew everywhere, and we bolted to shelter. No one was injured. It is marvellous. Up to the present it has been the most wonderful week in my life—full of excitement and hair-breadth escapes.
Sunday came—May 30. The day dawned peacefully, minus the artillery duel which ordinarily heralds the coming day. The blue Mediterranean lay like a sea of glass at our feet. Imbros Island, opposite Anzac Cove, lay wreathed in the morning mists. Torpedo boats glided to and fro across the waters, lest some adventurous submarine should attack. All was peaceful. Ashore, the wild flowers blossomed on the hillsides. Birds chirruped contentedly in the scrub. Soldiers released from a night’s vigil in the trenches sauntered along the winding road to the beach, dived in and sported freely in the sea. The transport mules munched contentedly, and the Indians lay back smoking hubble-bubbles. Light Horsemen (minus their horses) and infantrymen emerged from their dugouts and stretched themselves lazily in the sun.
It was too good to last—too good altogether. Some activity behind the Turkish trenches attracted the attention of our artillery observation officers, and our guns boomed out a warning. It was evidently disregarded by the enemy, for more of our guns opened fire. Then the Turks replied. The hills around spat fire, and the valleys echoed and re-echoed with peals of thunder. Shrapnel shells and “Jack Johnsons” went screaming overhead, to burst with a deafening report over our trenches and bivouacs. Our guns were so cunningly concealed that the German artillery officers could not locate them, and for the most part their shells ploughed up the unoffending earth, or made harmless rents in the atmosphere. Our artillery had better success. Our guns tore down the Turkish trenches, and the Turks flying to shelter were met with a devastating fire from our machine-guns. Still, we did not have it all our own way. Now and then a shell landed in our trenches, and the story of it was told in the casualty lists.
About one o’clock the artillery duel began, and it continued without cessation for over an hour. The roar was awful. Bullets spattered everywhere. The marvel was that our losses were so few. Gradually the big guns grew silent. Our warships aimed a few salvos on to the enemy’s position, then drew off. Soon there was comparative calm. There remained but the interminable fusillade of musketry which never wholly ceased on the trenches round Anzac.
At eventide the Ægean Sea took on new colourings. The sun set in a blaze of splendour; the whole western horizon was alight with its reflected brilliance. The islands seemed to rest against a superb canvas on which Nature had splashed lavishly a wealth of gold and rose-red and saffron and purple and amethyst. The sea in turn mirrored and accentuated the beauties of the scene. The angry armies gazed in quiet contemplation of Nature’s craftsmanship, forgetting their mutual hate.
Up on Braund’s Hill—where Colonel Braund, who used to sit for Armidale in the New South Wales Parliament, had met with a tragic fate soon after the historic landing was made—right at the entrance to the trenches in the firing-line, Divine Service was being held. In the days of my wanderings I have attended many church services, in shearing-sheds and on mining fields, on board troopships, and in the bush; but never had I attended such a service as this. Captain McKenzie, of the 1st Infantry Brigade, and Captain Robertson, of the 2nd Light Horse, were the officiating chaplains. Soldiers, unkempt, unshaven, unwashed, lolled around on the path or the hillside. Men coming from the trenches joined in the singing. Men going to the trenches for the night lingered awhile. And they sang the old well-known hymns. None asked for “Onward, Christian Soldiers,” or any of the warlike hymns at all. They wanted the old gospel hymns. So we sang, “Jesus, Lover of My Soul,” “Sweet Hour of Prayer,” and “Abide with Me.” . . .
Firing had recommenced before we finished the service, and the chaplain’s voice was now and then drowned in the rattle of musketry or the bursting of shrapnel. And because of the shells and bombs which continually burst overhead, we meant it when we sang “Cover my defenceless head with the shadow of Thy wing.”
A few words of prayer, a few words of exhortation and commendation, and then the service was over. Some filed off to the trenches for the vigil of the night. Others formed up for the reserves. The rest of us returned to our dugouts, to snuggle in while the roar of battle raged overhead. And one soon gets used to the battle noises. I fell asleep thinking of dear old New South Wales, my dear old home, and—my dear old mother.
You may also like