The Royal Naval Division During the First World War at Gallipoli, and in Europe on the Western Front 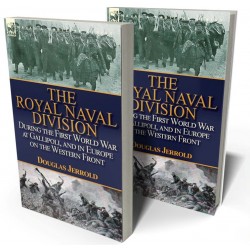 The sailors and marines of the Royal Naval Division at war

Douglas Jerrold’s history of the campaigns and battles of the Royal Naval Division during the First World War is an acknowledged classic on the subject. Royal Navy personnel together with their guns had been regularly employed on land throughout Queen Victoria’s long reign in the Crimea, during the Indian Mutiny, the Zulu War, The Boer war and even during the Boxer Rebellion in China. The outbreak of the First World War in 1914 was however an entirely different kind of conflict—a true world war of the industrial age which would draw upon every resource the combatants could gather to wage it. The necessity for the Allies to employ naval personnel to secure the channel ports of Ostend, Dunkirk and Antwerp resulted in the early employment of the Royal Naval Division, but was terminated quickly and disastrously. In 1915 the Gallipoli campaign proved to be another costly proving ground before the ‘sailors on land’ were transferred to the carnage of the Western Front and trench warfare. There the division saw hard fighting in the battles at Ancre, Oppy Wood, Passchendaele and Welsh Ridge among others. It stood against the brutal hammer blow of Germany’s last great offensive suffering enormous losses before taking part in the final advances to victory in 1918.