Fights & Flights with the Royal Naval Air Service: a Personal Account of Service with Armoured Cars and Aircraft During the First World War 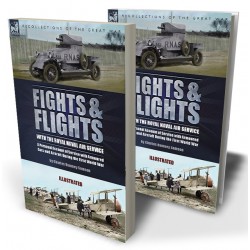 The author, Charles Samson, was one of the first four officers selected to be a pilot by the Royal Navy and was the first to fly an aircraft from a moving ship. By 1912, he was commanding officer of the Royal Naval Air station at Eastchurch. When war broke out in 1914, Samson took his RNAS squadron to France, but a shortage of aircraft initially converted the squadron to an automotive force. Its role involved reconnaissance and aggressive patrolling, firstly in private cars fitted with machine guns and subsequently in armoured cars supported by Royal Marines, frequently undertaken behind enemy lines. Eventually supplied with aircraft, the squadron undertook bombing raids into Germany. In 1915 Samson joined the Dardanelles expedition with No. 3 Squadron. He was involved in operating seaplanes from HMS Ark Royal, personally flying missions against naval and land targets and his narratives of action during this period are riveting. In 1916, he took command of a former Isle of Man passenger steamer that had been converted into a seaplane carrier, patrolling the coasts of Syria and Palestine and operating against Turkish forces until his ship was sunk in action. He was then transferred to the Indian Ocean to join the hunt for enemy commerce raiders. From 1917 until the end of the war he commanded an aircraft group on the Home Front, based at Great Yarmouth, responsible for anti-submarine and anti-Zeppelin operations. Samson, resigned from the Royal Navy, joining the RAF in 1919. Illustrated.
Leonaur editions are newly typeset and are not facsimiles; each title is available in softcover and hardback with dustjacket.

On the evening of the 29th Armstrong telephoned to me that he did not like the situation at Douai, as they were practically in a state of siege, and he thought there was every likelihood of a serious disaster. I immediately set out for Douai with two armoured cars and three touring-cars, at the same time telephoning to Coode at Lille to stand by to go to Douai.
Arriving at Douai, I found that General Plantey was not at all happy as regards the situation. He was very pleased to see us, and said that our presence there would encourage his troops, who, it must be remembered, were all Territorials of uncertain age; he was also very short of officers, and those he had were mostly insufficiently trained.
On the day after my arrival General Plantey sent me out to see what the situation was on his left flank. I carried out a long reconnaissance with my full force, and got into Orchies without finding any Germans. At Auchy, which is about 3 miles from Orchies, I found a battalion of French Infantry, and after a consultation with their colonel it was decided to send a company to Orchies. I therefore went back there, and going through the town got to the position where we had started our fight on September 24th, intending to stay there until the French infantry were in position at the cross-roads behind the town. Whilst waiting for the French to arrive I determined to try my new rifle, and with Armstrong spotting I fired half a dozen shots at a tree. Everybody was at peace with the world, when ping, ping, ping, came some shots in reply from the direction of my target. Everybody ran for cover.
We soon settled the opposition, though, as we opened fire with a machine-gun, sweeping in an arc through the trees ahead of us where the shots had come from. Nothing further happened, although we spent another half-hour in position. The French by this time arrived, and I went back to Douai.
The situation now was that there was a battalion between Orchies and Auchy, and nearly 5,000 infantry with one battery of artillery in Douai. As far as I could see there were no outposts outside the town except at Le Racquet, all the remainder of the troops being inside the walls of the town. This appeared to me to be a bad sign. During the evening the Germans shelled Le Racquet, and I was sent out in case an infantry attack followed; but this didn’t eventuate, and we suffered some shelling for nothing. I went to bed that night fully expecting some hard fighting next day.
We all slept in our clothes, and I put our school in a good state of defence in case we had a night attack; I felt we could hold it against quite a strong force.
I found that I was perfectly right in my surmise, as the morning found us guarding the barricades at the Ponts de Valenciennes and Cambrai. These barricades were the most comic affairs, having been put up at the last minute, and mostly consisted of wire mattresses and a paving-stone or two. Certainly, they provided no protection. After waiting at these spots for over an hour, and seeing the infantry gradually dwindling away, I came to the conclusion that we would soon be left to fight alone. I telephoned to Captain Coode at Lille to come to Douai at once with his three cars.
I then reported to General Plantey that it would be impossible to hold out with the cars unsupported by infantry, as the Germans would get into the houses, and experience had shown that for house-to-house fighting cars were of little use. It was essential that infantry should occupy the houses near the barricades to prevent the enemy from getting behind the cars. I strongly impressed on General Plantey my opinion, which was either to fall back out of the town and occupy the high ground behind it, or to debouch from the town and attack the enemy. In either operation we would stand a good chance of success, as the armoured cars would prove valuable weapons in a fight outside the town walls; but penned in inside the town, they were seriously handicapped. If the cars had been properly designed, affording protection for the crews, they would, of course, have been fairly useful for street fighting.
After a consultation with his staff and myself, the general decided to evacuate the town, and take up a position behind it on the high ground, where we would be in an excellent place to hold out until the arrival of the reinforcements who were reported to be arriving at Lens and Arras.
The general said that he would depend upon me to guard the retirement of his force along the Hénin-Liétard road. This I guaranteed, as the road passed through country which was very suitable for our style of fighting, and I reckoned that over this sort of ground each car was equal to a company of infantry. I immediately sent off the cars to various points along the route. I had by now no less than eleven fighting cars, about two-thirds of them being armoured. Captain Coode having arrived with his section, I remained at a position about a mile behind the town with two cars, whilst Armstrong went about half-way between the main road and Le Polygone to prevent the enemy advancing through Dorignies.
As soon as I reported we were in position the evacuation of the town commenced, and the wounded, ammunition, and transport were all passed safely through.
When we had got the majority of these away, I received orders to escort them to Hénin-Liétard and Lens. I therefore sent off all my cars except four to carry out this work, keeping these latter with me.