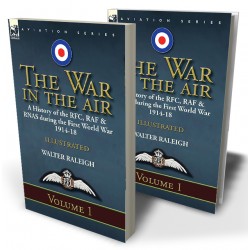 Man has dreamed of flight from the moment he first beheld the freedom of the birds of the air. Having resolved the practical problems of becoming airborne, it was not long before applications were considered which led to the development of aviation for use in warfare. Manned observer balloons provided a ‘birds-eye view’ of the battlefield for gathering invaluable information for commanders on the ground. When powered flight became a reality during the early years of the 20th century, it was, once again, as ‘scouts’ that aircraft found their first role; spotting for the artillery and gathering detailed dispositions and movements of enemy troops. Aeroplanes first went to war in Libya in a small conflict between the Italians and the Ottoman Turks in 1911-12, but the great war in Europe that erupted in 1914 would see an enormous acceleration in air power. More varieties and models of aircraft were developed. They became fighters and bombers, and many nations developed their own specialised corps to meet the demands of this new dimension in the waging of war. This multi volume history tracks in detail the development of the RFC, RAF and Royal Naval Air Service throughout the First World War and is an essential addition to every library of aeronautical warfare—especially in the year of the centenary of the birth of the Royal Air Force. Contains images not present in earlier editions of this work.