The Battle of Jutland: the Sowing & the Reaping--The Great Naval Engagement of the First World War,1916 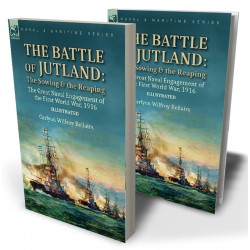 The clash of great navies in the North Sea

The Battle of Jutland was notable in the history of naval warfare for several reasons. It was not only the most significant naval engagement fought by the Royal Navy since the close of the Napoleonic Wars a century before, but was also the only great naval battle of the First World War. There have been many histories written about the battle and it remains perennially interesting to students of naval warfare in the modern age. Leonaur's Editors believe that this book by Bellairs is particularly erudite in its analysis of the event and is more than worth bringing back into print. On its original publication the book included many diagrams demonstrating the movements of vessels, these have been retained and enlarged. This new edition has also been significantly enhanced by the inclusion of many additional illustrations of the battle and the vessels of the protagonist fleets.