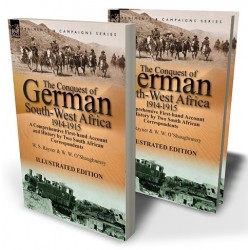 The war for colonial Africa

This very substantial book, written by the two South African official correspondents on the campaign, narrates the expedition in 1914-15 which led to the conquest of German South-West Africa (the region now known as Namibia). One author accompanied the Northern Army and the other, the Southern Army. During the 19th century the great powers of Europe raced to establish themselves in all corners of the globe for colonisation, trade and political influence. In the ‘great scramble for Africa,’ the British and German empires had established themselves, by degrees, in the east and west of the continent. In the years before the outbreak of the First World War these colonies existed, more or less, in harmony but once hostilities erupted German and British settlers found themselves living in very close proximity to hostile forces. The British had the advantage of numbers since colonisation had long been a policy, though the Germans compensated for this measure with the abilities of their military commanders and the expertise and quality of their European and locally raised troops. (South Africa itself entered the fray, its forces led by commanders who a little over a decade earlier had led the Boer burghers in their attempts to form a nation independent of the British Empire.) This campaign of mobility was fought in the searing heat of a desert region and was often a ‘tip and run affair’ as mounted troops traversed huge tracts of inhospitable terrain. Those interested in the First World War often find it’s ‘side-show’ theatres fascinating because they differed so completely from the war of stalemate and attrition on the Western Front. This is a very thorough and comprehensive book written by competent authors who experienced the campaign at first hand and were well qualified to record both their personal impressions and an informed overview of the events they witnessed. This edition of the text is liberally enhanced by the inclusion of many photographs taken on the campaign.
Leonaur editions are newly typeset and are not facsimiles; each title is available in softcover and hardback with dustjacket.

As noon approached the T.H.A. gunners were found to be dwindling away, gradually but surely, mostly wounded. Ammunition, too, was getting thin. It was decided to remove the guns close in to the kopje, at a spot near which the garrison was now concentrating. About this time the rattle of musketry outside was faintly heard. It was the relief trying to get through. Later on the sounds had died off. The attempts had failed.
Within the next hour “B” gun ceased to fire and “A” gun had but two gunners left. “A” gun did not long survive. It was not itself damaged, but its unwounded survivors were unwounded no longer; a shell had burst close to them on the left. Lieut. Adler, the officer commanding the guns, was now the only unwounded survivor. He could do no more than render the guns useless, and all the breech blocks were accordingly removed. This action seemed to be suspected by the Germans, who sensibly increased the intensity of their fire without, however, interfering one iota with the operation, which was facilitated by reason of a heavy fire poured by the S.A.M.R. into the German lines.
The Germans then turned their attention to the animals, and in half-an-hour had practically wiped out the lot. Scarcely a dozen came through unscathed. Still later, the enemy closed in on the south and, concentrating on their machine guns, enfiladed the positions occupied by the S.A.M.R. Finally, they attempted a cavalry charge, also from the south, but this was repulsed—a slight negative success for the garrison. In no wise did it affect the position, however. The plight of the besieged was undoubtedly desperate. It was complicated by the fact that the officer commanding, Col. Grant, was himself wounded. All hope of receiving relief had been abandoned.
Surrender, therefore, seemed inevitable; and the inevitable happened at 4.30 in the afternoon, after the force had, metaphorically, held up its head for eight hours against overwhelming odds. “Cease fire” was ordered, and a white flag was improvised and hoisted. It took fifteen minutes for the flag to convey its message to the Germans, and meanwhile it attracted no little rifle fire to itself. Indeed, the officer supporting it was actually shot in the leg—a flesh wound only, but still a wound.
Throughout, the Britishers had shown nerve and grit as well as capable shooting, and their behaviour was undoubtedly worthy of the best traditions of the race. The German Commander, who was Col. von Heydebreck, the commander-in-chief of the German forces, himself complimented Col. Grant on the gallant stand that he and his men had made, and specially referred to the work of the artillery. He had, as it may be assumed, no little admiration for the work of his own men; and from an order that we found at Tschaukaib early in November, we learn that no fewer than seventeen of them received Iron Crosses in token of the victory. Still, Col. von Heydebreck’s admiration of the behaviour of the Union forces seemed to be sincere. There was some confirmation of it in the fact that by his orders the British dead were buried first, and their captured comrades were allowed to attend the funeral, while, after full military honours had been accorded, he himself delivered a short oration extolling their heroism.
All the same, it sounds very strange, when contrasted with the treatment that was meted out to the prisoners, for these had fought just as heroically as their unfortunate dead. Other Union soldiers who had the ill-luck to find themselves prisoners with the Germans have since remarked on this—that the Germans treated no prisoners so badly as those that were taken at Sandfontein. These men, notably at Franzfontein, were reduced to such straits that they were compelled to go about camp in sacks and rawhide sandals, having no other clothing. It is true that at this time there was another man at the head of the German forces: Col. von Heydebreck had passed to the great majority, and had been succeeded by Major Franke. That may be the explanation.
The British casualties totalled 12 killed and 40 wounded, and 205 officers and men captured. The German losses were officially returned at 14 killed (including a major and subaltern) and 25 wounded. Both German and British medical sections were on the scene, and the wounded received generally good treatment; but the Germans detained two British ambulances and two medicos “for the British wounded.” During fight a small section of officers and men of the S.A. Medical Corps most heroically moved about rendering what service it could.
The enemy got very little booty. Apparently they wanted none, for they burnt most of what they did get. It was noted that they specially retained the horses’ bits, “as they are better than ours,” so they explained. The captured field guns were taken to Windhuk, and, as trophies, placed alongside the Herero Memorial there; but they were nowhere to be found when General Botha entered the capital.
To what may the disaster be ascribed? I have heard the scouting blamed. I have heard it contended that the Union forces allowed themselves to be foolishly trapped. But I do not think there can be much doubt about it that it was almost entirely a consequent of the rebellion. To say the force was trapped is to give undue credit to the Germans, who not only poisoned, or sought to poison, the water at Sandfontein, but destroyed the machinery by which it was raised. It is conceivable that if they had intended to trap the Union force by pretending to evacuate the place, they would have left some allurement in the form of a water supply that had not been interfered with. I think there is a tendency to overlook the fact that it was about this time that Maritz finally satisfied the Germans that he was their man.
You may also like