The German Invasion of Belgium & France 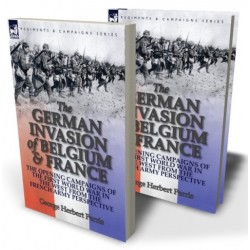 At length, on the 13th, the 2nd Cavalry Division brought relief from Toul. The men were exhausted from lack of sleep; the fort showed ruins on every hand (largely the work of shells 3 feet long, of 305-mm. calibre). But Troyon had fulfilled its task.
A few days later, the effort to break the Meuse line was repeated a little further south, at a point where the Fort du Camp des Romains overlooks from the forest-clad hills the ancient town of St. Mihiel, on the left bank in a loop of the river. St. Mihiel is the converging point of roads from Pont-à-Mousson. Vigneulles, Heudicourt. and Woinville. It had a considerable garrison, whose barracks were situated on the other side of the river, in the suburb of Chauvoncourt. Along this west bank of the Meuse runs the railway from Verdun to Toul—of less importance since the Ste. Menehould line was recovered, but not lightly to be lost. Four German army corps, with heavy siege guns, under General von Strantz, were engaged in these operations; and, after a most hardy resistance, the fort of the Camp des Romains fell on September 22. The survivors of the garrison, 300 in number, were, said an American correspondent with the German Army, accorded the most honourable conditions.
On the following day, St. Mihiel was occupied, and a long foot-to-foot struggle, first on the west, then on the east of the Meuse. During October, the Verdun army was able to reach further to the south-east, and the Toul troops to the north-east, but with no more success than to stop the German advance, and to restrict and threaten constantly the German force pushed forward, like a spear-head, from Pont-à-Mousson and Thiaucourt to St. Mihiel. From its fastness on the Camp des Romains, neighbouring villages were bombarded, including Sampigny, and President Poincaré’s villa therein. On November 17, the French troops silenced some German mortars which had been placed on the hills at Paroches, and seized the western part of Chauvoncourt. They then found that parts of the town had been mined. On the morning of the 18th, the mines were exploded; the French lost about 2,000 men, killed, wounded, and prisoners, on this occasion. The Metz army retained a bare foothold upon the Meuse at St. Mihiel, the only substantial piece of ground won since the battle of the Marne.
After its defeat at Morhange and Sarreburg, on August 20, General de Castelnau brought his army back to its prepared positions along the circle of low hills to the northeast of the picturesque town of Nancy, with the fortress of Toul behind. The retreat was so hard-pressed that it would appear extravagant to attribute its direction to a cool, strategic design. Nevertheless, important strategic consequences followed. The gap of Charmes-Mirécourt, between the fortresses of Toul and Epinal, was left open, save for minor forces which Castelnau and Dubail could spare for the work of obstruction and harassment in that direction. It was a temptation; and the German commanders never seem to have been quite certain what to do about it. The main French Army was drawn up in a semicircle from near Pont-à-Mousson, through the plateau of Amance, rising to 1,000 feet over the forest of Champenoux, to Dombasle and the forest of Vitremont. It was outnumbered, probably by two or three to one; but it held strong natural positions, improved by entrenchment.
The Crown Prince of Bavaria, in command of the Bavarian Army and certain troops from Metz, could probably have penetrated from Lunéville and Baccarat to Mirécourt, and thence to Châlons, had he concentrated upon this objective. But he would then have had not only two fortresses upon his flanks, but a great army behind. Lunéville, as we have seen, was occupied on August 22. Thence, the German left crossed the Rivers Meurthe and Mortagne, and advanced to the Moselle. They were received by a heavy artillery fire from the hills above Bayon on August 24; but their progress was more effectually arrested by the news that Castelnau was taking the offensive eastward of Nancy. Part of the force was brought back just in time to recapture the wood of Crévie.
The 59th and 68th French Reserve Divisions on the left, and the 36th Brigade on the right, now marched eastward along the roads from Nancy to Delme and Château-Salins, toward Amance and Champenoux. For several days, only skirmishes took place. The object was not to cross the frontier, but to create a diversion, and to take up and entrench favourable positions which would make even a distant bombardment of Nancy impossible. By September 3 (they do not seem to have hurried—perhaps they were synchronising their movements with Von Kluck and Von Bülow), German re-enforcements particularly strong in artillery began to arrive. The great crisis was being reached in the west, and General Joffre did not want the added risk of adventures in Lorraine. De Castelnau was ordered, therefore, to hold himself on the defensive.
By this time, the German commanders had come to accept the necessity of a frontal attack upon the line of the army of Nancy. It began in force on September 4; and it is said to have been supported by no less than four hundred heavy guns, many of them borrowed from the forts of Metz and Strassburg. For a week, with hardly any cessation, the French positions on the Amance plateau were bombarded from behind and within the forest of Champenoux, and the positions further north, at Mont Ste. Genevieve, from the forest of Facq. On the latter wing, Pont-à-Mousson was occupied by the enemy, 12,000 strong, on September 5, the French soldiers blowing up the Moselle bridge behind them. The town was retaken on the 10th; and thereafter the French held the left, the Germans the right bank of the river. At the neighbouring village of Loisy, a single company of infantry posted itself in the cemetery, and, waiting till the Saxon attackers were quite near, opened a deadly fire upon them.
Books from this set
You may also like