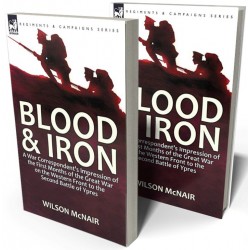 There have been many books about warfare written by those who experienced war at first-hand. Until the middle years of the nineteenth century these authors were invariably amateurs, and primarily serving soldiers or diplomats. All that changed with the emergence of the ‘special’ or ‘war correspondent’ ever on ‘the spot’ whose ‘copy’ appeared in numerous newspapers and periodicals. These professional writers would describe what they had witnessed from the heart of the action in a graphic style which brought events to life with greater clarity than ever before. Many, naturally, retained the inevitable sensibilities and style of the newspaperman. Occasionally there was one who, like the author of this book, broke the mould, even though his talent as a writer has not earned him lasting recognition. Nevertheless, McNair so well describes the towns and villages of Flanders during wartime that the reader will walk their wet, dark streets with him. He lets us witness the march of weary men, the battlefield, the transport depot and the hospital. He explains the movements of armies and plans of generals in a way that any lay person can immediately grasp. This book is a thoughtful, erudite, well crafted and evocative view of the opening months of the Great War on the Western Front and is recommended.

The thunderbolt attack succeeded in a measure, and the French who held this point fell back. They sent the Household Cavalry to stiffen the French resistance—the 1st and 2nd Life Guards, with the Blues in reserve. It was like sending thunderbolt to meet thunderbolt. But then “suddenly the French returned at a run, reporting an advance of the Germans in strength. General Kavanagh doubled a couple of squadrons across the road to endeavour to stem the rush and suffered a certain number of casualties in so doing. Considerable confusion ensued, and there was a mêlée of English, French, and Germans.”
Out of this mêlée, like lightning out of a cloud, was developed the charge which saved the position and perhaps the city as well. The Guards do not yield, it is their tradition to conquer or die. And so this splendid body—the very flower of England’s chivalry—prepared to leap again against their foes and to avenge the transient success which had been wrested from them. It was surely a case of noblesse oblige in the finest interpretation of that idea. Wearied though they were, and mud-bespattered and sore tried, they hurled themselves grandly against the close ranks of the enemy, and the day was given to them, as it seemed, out of the very hands of God.
The battle grows old upon the plains of Ypres—the Battle of “Hanging On,” which is the new wonder of the world. The flood of attack has well-nigh spent itself against this terrible barrier that is so frail yet so elastic, so thin yet so impenetrable. Wave after wave, waves of living men, has been broken asunder until hope is grown a-weary and confidence has become cold.
Yet there must be enacted a final scene, since the eyes of the War Lord are upon his soldiers. What the Guard of England has accomplished the Prussian Guard can accomplish also and in fuller measure. The day of victory, long deferred, shall yet be hasted and the fruits of victory garnered.
And so Wednesday the 11th November disclosed a strange sight about the dawning, when the light stole dimly along the bitter stretches of the road to Menin. Here surely was burlesque within the very arena of death—a spectacle of disordered minds, the apotheosis of overweening vanity. In the dim dawning of this November day the Prussian Guard upon the road from Menin are showing the goose-step to their astonished foes.
What a scene that for history to dwell upon. The long, long fields, peopled with the dead of three nations. The pollard willows weeping by a dozen misty streams.
The dank smell of the trenches, and the terrible sucking sound of the mud upon boots and legs. The voice of the wind, dismal, among the trees—far away and just visible in this pale glimmer of light the towers of the ancient city rising up like a benediction.
And along the roadway this prancing column with stiffened knees and pointed toes dancing heavily to death. Brave men indeed, and iron discipline—but can the mind of free man contemplate them without amazement that is near akin to ridicule? If a man must go to death let him go easily. Our soldiers gazed in astonishment, scarce understanding what they saw, and then on a sudden the hail of shells was unloosed upon the Prussian Guard, and the work of butchery was begun.
They came by the road from Menin—the road that is paved with the bodies of the brave and cemented together by their blood, and though their sublime courage carried them through the lines of our army in some places it was upon the road from Menin that they perished. The guns pounded them, the bullets mowed them down, the bayonets drank of their blood. Broken and withered they were cast back again—the remnant that remained—to the feet of their Imperial Master, whose behest they had so signally, yet so nobly, failed to accomplish. . . .
The Battle of “Hanging On” is ended, and the long winter comes bitterly to the plain before Ypres city, where in other days good husbandmen prepared the soil over against the coming of spring. Another husbandman has these fields now in his keeping, and his harvest is rich under the weeping skies.
You may also like