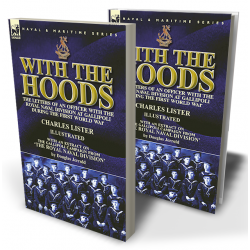 With the Hood Battalion during the campaign in the Dardanelles

Although there remains much interest in the activities of the Royal Naval Division during the First World War, there is little original material on the subject readily available. The letters which form a substantial part of this book, may have been overlooked by many readers since they were originally published under a title that gave no indication that the book was about service with ‘the sailors in khaki’. Charles Lister was a frequent correspondent with his family and friends while travelling abroad before the outbreak of war, and he continued this correspondence throughout his military service until he died of wounds sustained while serving with the Hood Battalion of the Royal Naval Division during the Gallipoli campaign. After his death, Lister’s father, Lord Ribblesdale, published his son’s letters as a memorial. Leonaur’s editors are aware that their readers’ principal interest lies in military matters and so in this edition Lister’s letters commence in 1914, the first year of the war. Lister’s descriptions of his progress through the war in the Dardenelles, give essential first-hand information. The author served with the poet Rupert Brooke who, of course, appears within these pages. To give context to Charles Lister’s letters a brief outline of the Gallipoli Campaign from the perspective of the Royal Naval Division is also included in this edition. Illustrated with photographs and maps.

We have now done with our time in the trenches and emerged from four days’ very hard work with great credit. This is due to our acting C.O. Freyberg, who will come and see you when we get home.
Our digging operations, carried out at night within about two hundred yards of the enemy’s trenches and under a certain amount of rifle fire, have not only made our own position quite secure but rendered untenable for the Turks a small portion of our sector which they still held in between our extreme right and our right centre. They have also given us a point of vantage from which we can enfilade Turks retiring before the French on our extreme right.
Oc. has been extraordinarily dogged, and is practically responsible for all this corner, which will be known as Asquith triangle. He hadn’t a wink of sleep all the four days, and Patrick and Kelly also distinguished themselves, and in one night dug a long trench connecting Asquith triangle with our main support. Six men of this company were killed and wounded, and I think the company of another battalion working with them lost about as many. Patrick and Kelly remained above ground the whole time, and it is a wonder they were not hit. Their petty officer who was doing the same got killed. This trench will be called Shaw-Stewart Street.
Our last two days my company joined Oc. in the fire trench. The fire trench is heavily sniped, and before I had been in two minutes I got a bullet through my helmet, which was a salutary warning and made me keep my head well down. My company was chiefly occupied in operations against a little advanced post the Turks had pushed up against our lines like this. There was a sandbag barrier separating us from the Turks. One night we took this barrier down and pushed it about ten yards up the Turkish communication trench. As things were before, the Turks could have come up quietly and dropped bombs into us.
The next day we were more ambitious. The artillery—an Australian battery and the French—shelled the advanced Turkish post for about twenty minutes while we massed, with a covering party of men with bombs and bayonets and a main body of men with sandbags, in the trench, ready to rush out up the old communication trench and push our sandbag barrier still farther forward. It was not feasible to take the Turkish advance post, as it could not be held in face of Turkish guns on the hill slope opposite.
Our shelling was magnificent. We realised the importance of rushing in immediately our shelling ceased. But as it turned out we were rather too close, for a shell fell among our people and buried six of them, who were however, dug out unhurt or only slightly wounded. The shell luckily did not burst. This was followed by a Turkish shell which fell right in the middle of us as we were all crouching for the rush, hit Freyberg in the stomach, killed another man, and covered me with small scratches, which bled profusely at the moment. We had by now got our original barrier, so I got our covering party out and rushed them up the trench over quite a number of dead Turks, while my company commander, a grand fellow called Egerton, most valuable organiser, did the same with sandbags.
We stopped our men just short of the Turkish advanced post: threw bombs in which did not light and would not burst, and at once started the new barrier; not a Turk in sight The snipers, however, soon came back and made work at this point difficult, so we moved back and contented ourselves with a gain of about forty to fifty yards on our old position. The men, once they had recovered from the shaking they had got from these two shells, behaved very gallantly. We had only one man killed, and the East Lancs (Kitchener’s Army), our neighbours, who helped us very cordially, lost their company commander; sniped because he put his head up.