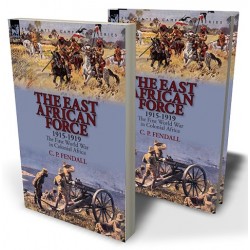 War in the East African bush

The First World War was inevitably a global conflict because the rush by the principal powers of Europe to establish trading bases and colonies, principally during the 19th century, guaranteed it would be so. In Africa, German and British settlers were close neighbours and at the outbreak of hostilities were ready for immediate confrontation. National and imperial forces were dispatched to augment local military operations. This book concerns the struggle for East Africa. It was written, drawing on memory and diary entries, by a British senior staff officer, a brigadier-general, who was central to the organisation of the British campaign and who has left posterity a concise, thorough and detailed historical overview of it from the British perspective. This book qualifies as a campaign history rather than a first hand account and is recommended to readers seeking that perspective on this interesting ‘sideshow’ theatre of the war.
Leonaur editions are newly typeset and are not facsimiles; each title is available in softcover and hardback with dustjacket.