A Subaltern in Serbia: With the Tenth (Irish) Division in the Balkans During the First World War 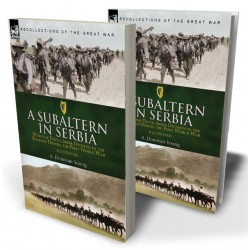 The First World War in the Balkans

In late 1915, an Anglo-French military expedition was dispatched to the Balkans to assist the outnumbered Serbian Army's efforts as it struggled against superior invading Austro-German-Bulgar forces. Although the First World War was mainly disputed on the Western and Eastern Fronts, several 'side-show' campaigns were also fought across the globe. Even among those often forgotten conflicts, the 'Salonika Campaign' is among the least chronicled. Nonetheless it was a bitter conflict undertaken among inhospitable mountains in often harsh weather. The Allied Force was eventually compelled to withdraw into Greece. This book concerns those events from the perspective of a young officer of the Tenth (Irish) Division serving with a draft of the Dorsetshire Regiment to reinforce a battalion of the Royal Munster Fusiliers that had come from the reverse at the Dardanelles. The text is drawn partly from the authors recollections and partly from his letters. This edition of the text contains photographs that were not included in the book when it was originally published.

Suddenly, our guns became silent. There was a sharp fusillade, followed by a hoarse cheering, and we realised that the Argylls and Gloucesters had set foot in Bala. Our work now commenced, and you might have seen an unceasing stream of Khaki-clad figures laden with iron stakes, barbed wire, and bags and ammunition, running the gauntlet of the Bulgar guns as they swept the ground between Bala and the river. Bala had to be fortified against the inevitable counter attack, and we had to provide the means to do it.
Now and again a well-directed shell from the enemy found its mark, but that, of course, was only to be expected, for one cannot move in broad daylight over open country and under the very nose of enemy guns without casualties. Just then, as you will perceive, Teddie, we were filling only an unpicturesque role in the drama of the day. Meanwhile, kilted Argylls marched in the batches of prisoners who had fallen into their hands at Bala
In the second batch a Bulgar officer strode in with dignified gait at the head of the prisoners—the very picture of the redoubtable Foxy Ferdie—a fine looking man who was in striking contrast to the disreputable mob which followed him, doffing their caps and assuring us that they were Roumanians and not Bulgars, and telling us “Bulgars finished.” This, Teddie, I should mention, is the stereotyped assurance of nearly every Bulgar who comes into our hands. They told us the same in Serbia, but I flatter myself that we are not on this occasion in the least taken in. Imagine a mob of swarthy, dark-faced, bearded Balkanites, evidently very eager to gain the comparative safety of our side of the river, tearing the buttons off their dirty blue overcoats and the cheap gaudy badges off their grey caps, and pressing them on our grinning Tommies. There you have some idea of the scene.
But out beyond Bala the battle went on in grim earnest for the possession of the village of Zir, which it was evident the enemy were holding with a tenacity for which he has already gained a very fair reputation. At 3 p.m. wounded were coming in on stretchers and on their feet, and yet Zir was still in the hands of the enemy.
In Bala, the Bulgar gunners were now completing the devastating work which our own artillery had more than commenced in the early morning bombardment; while, Bulgar snipers picked out their prey from behind the advanced houses in Zir, and from points which gave them good cover along the sunken road which led from Bala to Zir. It was obvious that Zir was not going to be given up without a fierce struggle. Already an attempt by the Argylls had been held up 500 yards from the village. The Kilties had gone forward almost as soon as Bala had fallen into our hands, only to meet half way, and in the least favourable of all places, a strong Bulgar counter attack on Bala. The Argylls beat off the counter attack, but were themselves unable to go forward.
The afternoon had almost passed when orders came that Zir was to be taken forthwith. The Argylls and Gloucesters had been busy beating off counter attacks by the Bulgars, so the Royal Scots and Camerons, who had been in support during the morning, were moved up to do their share in the day’s work. The Camerons were on the right, and I could not see them; but from Bala I witnessed the advance of the Royal Scots.
It was the most intensely fascinating spectacle I have ever witnessed. The Royal Scots suddenly emerged from the cover of the sunken road with bagpipes playing, and marched through a devastating fire as unconsciously as if they had been on parade. Their commanding officer led them.
As they neared the Bulgar trenches in front of Zir, the Bulgar fire suddenly grew slacker, and when the Scots were close enough to charge and dashed forward with bayonets, they found the majority of the defenders with their hands up and the remainder in full flight, demoralised by the spectacle of that cool, advancing line of steel. The Scots went through the village and pulled up on the far side, with the Bulgars either retreating in disorder or submitting to capture.
You may also like