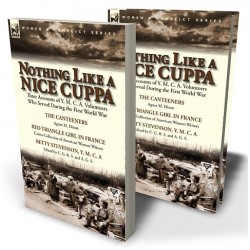 The cup that cheers

The First World War was considered the pinnacle in the development of warfare following the dawn of the industrial age. For the first time conflict on a global stage was fought on land, on and under the sea and in the skies. This war of the machines swept away swathes of humanity by the use of ruthlessly efficient means of slaughter. Every human resource was needed because it could not be waged solely by male armies on the fields of battle. This meant that the role of women in western society would be changed forever. Women became the industrial workforce, agricultural workers and the custodians of transport and logistics. Thousands more, from nurses to drivers, mechanics to entertainers, volunteered to provide essential services to support the fighting men on the front line. Many new and established organisations willingly put all their resources into the war effort. To the troops of the allied armies these volunteers—both men and women—were little short of angels, providing for body and spirit under the most difficult circumstances and their contribution to the morale of the soldiers in action cannot be over estimated. The Y. M. C. A was at the forefront of these activities, providing everything from essentials to much appreciated little luxuries, from the opportunity for a bath and shave to that mainstay of English or American life, a good, hot and much needed ‘cuppa’ tea or coffee, accompanied by a kind smile or a supportive word. This special Leonaur edition contains three accounts of these remarkably brave volunteers on the Western Front. Theirs was essential but often dangerous work and many of them made the ultimate sacrifice. This fascinating book relates an often unsung aspect of the Great War, but one which will be of enormous interest to those who require a complete understanding of the conflict and are interested in the changing role of women in the early years of the 20th century.
Leonaur editions are newly typeset and are not facsimiles; each title is available in softcover and hardback with dustjacket.

We have “2me Armée” posted up on our canteen, also “Dames Anglaises de la Goutte de Café.” In front of our big window is a wide sort of shelf, where we call serve out our wares. But we prefer to serve the soldiers direct in the trains, as it gives us a chance of talking to them and hearing their stories.
The colonel told us we belong to the 2nd Army, whose base is at Troyes, and invited us to move forward with it, and promised we should occupy a “palais” in Germany. Of course we said that where he went there we would go too.
Our marchandises from London have still not arrived, though they are at the station. But military necessities come before ours, and they are hung up there till tomorrow. So we had to start by buying in coffee and sugar, etc., wholesale, to go on with. Madame la Patronne at the hotel recommended us to a warehouse where we got what we wanted: prices very high—coffee 3.90 a kilo and sugar 1.14.
On Friday night, just as I was going to bed, I had a note from the commandant to say that wounded were expected from the front at 7 a.m. Juliet and I arranged to go early as Miss Gracie seemed tired, and we got up at 5.30 and reached the canteen at 6.30. I started out with a stick of chocolate to eat on the way, but as I noticed a baker’s shop was already open, I plunged into the dark doorway to buy some rolls. M. the boulanger was apparently in his bath behind the counter; it seemed odd, but it is best to take no notice of foreign habits, so I asked for two halfpenny rolls and finally made out in the gloom of the dawn that he had a pair of trousers on. He was enormously stout, and beautifully clean, and he was powdered all over with flour just like a nice clean baby after its hot bath. We neither of us took the slightest notice of the contretemps.
It was very pleasant in the early morning: cool and fresh and quiet, slightly misty. Our excellent Bourgeot had got the message we had telephoned through the night before, although the exchange had utterly denied that the Quai Croncels was on the telephone at all; and he had been up since 4 stoking the fire and heating up our coffee and bouillon, all of which has to be made ready overnight.
At 12 came another note that over 300 more were expected about 11, but they only required coffee, as dinner was going to be given them. Tables and benches were arranged all along the platform, and when the train got in (two hours late, of course) all who were well enough sat down there in the warm sunshine, weary, depressed, silent, dirty, grimed; some with torn clothes, dried blood on them; others with sleeves cut out to make room for splinted arms. A sad, sorry crew they looked as they sat there waiting to be fed; all had been in the train since 7, and many since the night before, without food. A small table was set at a little distance, laid for six, and after a time, when all the French soldiers had sat down, six wounded German prisoners came along and occupied it, guarded by two soldiers with fixed bayonets. They had faded, stained and dirty uniforms on; one was an officer, and all wore round service caps. They looked fairly decent men; three wore spectacles, and all spoke politely.
I said to the médecin-chef, “Don’t you think our coffee is much too strong for those Germans?” and he agreed that we might fairly water it a little. However, we didn’t. We gave them each some, and all thanked us politely. No doubt they supposed us to be French. But we drew the line at cigarettes; they didn’t get any of those. It was wonderful to watch the men’s faces change as they ate—they were so silent and depressed at first; then the hot bouillon took a crease or two out of their faces; next came a plate of meat and a quart of wine; finally a cup of hot coffee which made them smile; accompanied by two cigarettes each, which made their eyes fairly gleam.
Poor human wreckage! And to think that this goes on every day of every month. And to think what it must be in wreckage of German lives, who now have a fighting front of 1,400 miles. These men all came from Vitry le François; the train before from Tahure. I fancy the next attack is developing, and we shall have our work cut out.
It was a pretty sight—the long tables in the sunshine, with the lines of men in every shade of blue; it is nearly the same colour as our blues, but a little lighter. Their enjoyment was evident, and it was easy to start them talking and gesticulating by asking them if they had killed many Boches and how many prisoners they had taken. The bad cases remained on their stretchers, or were carried in to the dressing-stations to be attended to. We went along the train afterwards and fed the poor things with coffee and cigarettes. How heavy men are, if you want to lift their head and shoulders to drink! We must get some proper drinking cups for them with spouts.
When all this was over, at about 5, we had to make coffee for next morning.
A pretty long day, but worth it all for the pleasure we gave.
You may also like