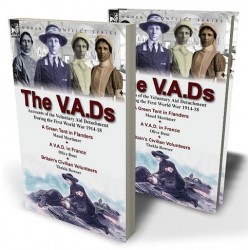 Three accounts of the brave women volunteers of the V.A.Ds during the Great War

Although the wars of the later 19th century, such as the American Civil War and the Franco-Prussian War, offered insights into what warfare would become as the industrial age developed, nothing could prepare anyone for the global conflict that became the First World War. Here was a lethal combination of warring nations, whose troops were armed with the most sophisticated weapons that technology could devise, each with the means of mass production to manufacture and deliver them. For the first time it was possible to wage war on a grand scale on land, in the air and beneath and upon the oceans. This was a war where millions of men took part in battle and, in consequence, stripped the production and support services workforces from their home countries. Women, already impatient for political reform, stepped forward to make a vital contribution to the war effort and in so doing changed their status in western society forever. There were many volunteer organisations who were relied upon to support the fighting troops, including the Scottish Women's Hospitals, the F.A.N.Ys, the Y.M.C.A and those who are the subject of this book—the V.A.Ds—the Voluntary Aid Detachments. Three quarters of V.A.Ds were women and girls and they became ambulance drivers, mechanics, cooks, clerks and learned trades which were normally the province of men. But it is in their role as nurses during the conflict for which they are especially remembered. The V.A.Ds included both trained and untrained nurses who worked principally under the direction of the Red Cross and the Order of St. John. This special Leonaur book about the V.A.Ds, published to commemorate the centenary of the outbreak of the First World War, contains three essential and riveting first-hand acounts by those who served, and provides invaluable insights into the developing role of women during those years of crisis. Recommended.
Leonaur editions are newly typeset and are not facsimiles; each title is available in softcover and hardback with dustjacket.

The rain is occasionally responsible for some few strenuous minutes. Thus the other night a sudden gust of wind accompanied by driving rain burst open the dual outside doors of a hut, the dual inside doors leading to the theatre, and also several windows.
I ran to close the doors snatching up on my way two green-lined umbrellas which figure in sun-cure cases. These I gave to men with limbs on extensions, and whose beds could not be moved immediately. Much amused they were to lie in bed with an open umbrella at two o’clock in the morning.
Beds were drawn out to escape open windows or a leaking roof, mackintosh sheets placed on beds that could not be drawn aside until the orderly could be summoned, bowls placed to catch the drippings from the roof, then help was obtained and the two cases of beds plus extension apparatus had to be dealt with.
Night duty during winter weather is somewhat of a Dantesque affair alternating between an inferno of cold and work-filled, perhaps grief-laden, patches of light. The marquees are very cosy, tightly-laced blankets wherever doors occur, and stoves cheerily filled. Between each marquee one dodges up to the knees in snow and slush buffeted by wind and sleet, and dipping under the eaves of the snow-laden tents with ill-luck as dogged as in tilting the bucket. In the surgical tents,—where dressings have sometimes to be done every four, and sometimes every two hours,—one develops into a quick-change artiste at shedding and donning garments.
The normal outfit of a night nurse on winter duty consists of woollen garments piled on cocoon-like under her dress, a jersey over the dress and under the apron or overall, another jersey above the apron, a greatcoat, two pairs of stockings, service boots or gum boots with a pair of woolly soles, a sou’ wester, mittens or gloves (perhaps both) and a scarf.
But there are other nights, nights of spring and early autumn with sheets of streaming, silver moonlight when not a breath stirs. The tent walls are rolled back, and looking down the alley of marquees one can see way down to the silent valley below, nights of radiant, faultless beauty bringing to mind Omar Khayyam’s stanza, and Matthew Arnold’s “Apollo Musagetes,” nights at one with peace and meditation or with nightingales and love, but with foul carnage and blood lust, man’s enmity and man’s agony—No!
Once on a time I held the extraordinary opinion that night nursing was dull, that all the nurse did was to arrange the patients’ pillows, give a few sleeping draughts, hot drinks, hot water bottles, an occasional dose of cough mixture, put out a light or two, shade others, and sit down to do a little sewing to prevent her being bored before morning came, and the patients were to be washed, and beds made.
That, by the way, was in the days before the war, when I had no acquaintance with ghastly wounds which require dressing every two hours, when the multiple-wound case was the exception and not the rule, when a ward which was then considered acute we should now regard as full of “convalescents,” when cerebral hernia, tracheotomy, trephine, colotomy, laparotomy, and the evil-smelling gas gangrene were comparative rarities, and certainly not to be found in any one batch of patients, when convoys were unknown, and there was no possibility of the tent-door being pushed aside in the middle of the night, and new patients in the form of pain-wearied men in dirty khaki being deposited on one’s beds.
My introduction to active service night nursing was a small hut under the same roof as the theatre, a few of the more anxious cases being brought there for special watching.
Poor boys, almost every patient in addition to other wounds and injuries, had had a leg amputated, and I used to go round from one to another in the dimly-lighted ward with an electric torch, and flash on the light to see that each stump was correct and there was no sign of haemorrhage.
With regard to work on “the lines,” so far from being dull, one is kept ceaselessly busy, for, in addition to dressings, many four-hourly foments, four-hourly charts, periodical stimulants and feeds,—the latter including jaw-cases where the mouth must be syringed and washed and the india-rubber tube attached to the feeding-cup cleaned and boiled,—there comes the unending, infinitely pathetic call of “Sister, sister, may I have . . . ” a drink, my pillows moved, my heel rubbed, now my toe, my splint moved, my bandage tightened, my bandage slackened, the tent or the window closed—or opened—a blanket off, a blanket on, a hot-water bag, a drink of water, of lemonade, of hot milk, of hot tea, now a cold drink, sister, to cool my mouth, a crease taken out of the under-sheet, the air-pillow altered, my hands and face washed, my lips rubbed with ointment, my fan, that fly killed, a match, a cigarette lighted, another drink, some grapes, my apple peeled, a cushion under my arm, under my back, a pad of cotton-wool under my heel, knee, arm, a bed sock put on, the bedclothes tucked in, I feel sick, I can’t go to sleep. Shall I have an antiseptic,—the almost invariable name for anaesthetic,—“tomorrow when my wound is dressed?” Then when the gamut is exhausted—“What time is it?” “What kind of weather is it?” “Can’t I have a prick, sister? Can’t I have a comforter?” (hypodermic injection). “Ask the M.O. when he comes.”
There are times too, when one hurriedly tiptoes along the ward at the mention of “Sister” only to find that it is not a call for help, but merely a patient talking in his sleep.
You may also like