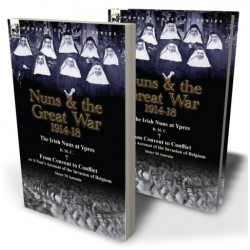 Two accounts of faith and humanity

The ‘storm of war’ is apt epithet for conflict. Mankind dominates the planet and his science and ingenuity can raise great structures, transform landscapes and traverse the skies and oceans. Yet against the most extreme forces of nature all this means nothing. So it is with warfare on a global scale for once it has been unleashed, its tidal wave envelopes not only armies and territories, but everything and everyone in it’s path. Civilian populations are always those who suffer most and no way of life is spared or immune. This book—containing two different but complementary accounts—concerns the gentle ladies of the Church who were caught up in the brutality of the First World War and who were diverted from their lives of prayer by its suffering. The first account concerns the Irish nuns of the Royal Benedictine Abbey at Ypres—a city which, as all who know anything of the history of the Great War realise, was enveloped in the earliest weeks of war and remained a place of peril and destruction. The nuns endured great privations in order to stay in their historic home and be able to offer relief to all those in need. Theirs is a moving story of faith and determination and is an essential chapter in the history of the First World War. The second text here, by a nun of the Convent of the Daughters of Mary, Willebroeck, near Antwerp—which was also the home of a boarding school for young girls—is another vital first hand account telling of the terrible months of 1914 as the German army swept through Belgium.
Leonaur editions are newly typeset and are not facsimiles; each title is available in softcover and hardback with dustjacket.