Zigzagging: the Experiences of an American Red Cross Nurse During the First World War 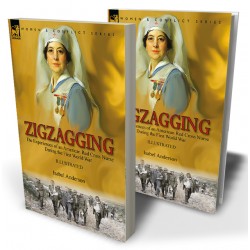 Boston socialite Isabel Weld Perkins (later Anderson) inherited $5,000,000 when she was 5 years old in 1881, so began her life of privilege. Nevertheless, when the First World War broke out she volunteered as a canteen worker in America, where she became the leader of Washington’s Red Cross activities and Belgian relief work. She then crossed to Europe to work in the war-zone, operating a Red Cross canteen for a period of time before working as a nurse, at one point in the company of the Queen of Belgium in a hospital operating theatre. Anxious to understand conditions in the trenches she travelled extensively through the front lines, where the redoubtable ladies from the Cellar House of Pervyse make an appearance, before travelling to England and then experiencing war at sea, including narrowly avoiding being sunk by a torpedo from a German U-Boat. This is an intriguing view of the Great War from an American woman’s perspective.

“Dr. Depage put me here in the salle where wounds are dressed and operations performed. I work under Dr. Vandervelde, with three charming Belgian nurses who are very nice to me. At first, I merely dusted and prepared the tables, and rolled long strips of gauze for plaster casts, and washed the instruments, and got the rubber gloves and the bowls ready to be sterilized, but before long I was waiting on the doctors, buttoning on their white operating coats, handing them sterilized articles with pincers, filling ether bottles, covering ether masks, blowing white powder on stumps, holding irrigation jars, cutting off old bandages, and even bandaging up wounds.
“I have gradually gotten into the doctors’ ways, and so now know exactly what they want for certain types of wounds and have everything ready for them without their asking.
“The only things which I have not done that all experienced nurses do is to shave the men (which apparently is not difficult, but there has never been time to learn) and to give the anaesthetics. The girls offered to teach me this, but I did not wish to kill anyone, and we were so very busy that I said we would wait for a quiet moment. That moment has never come, and probably never will, for we seem always busy.
“Such terrible wounds as we see here in this salle! Almost every man has an arm or a leg gone, or a bad wound in the back or thigh, and they often have all one side injured. One man has a leg so mangled that you can look quite through it in two places. I really don’t see how he can live, but they say he will.
“A fine blond Flemish soldier was hurried to us direct from the trenches without being even cleaned, because he needed to be operated on at once. He had been wounded at three in the morning, but did not reach us until eleven. The Germans had taken the trench and not wishing to bother with him had left him to die, but the Belgians recaptured the trench and sent him back. The doctor had to cut off both his legs, as both were badly smashed and gangrene had begun to set in. The amputating is done very quickly. A knife is used first, then a sharpened saw. When a leg drops off into the pail with a thud it gives me a shock, for it stands upright instead of crumpling up and collapsing, as I somehow feel it should when it is no longer a part of the body.
“The other day a man died on the operating table—he had a bad stump already cut very short. It was in such a terrible condition from gangrene that I was almost glad when he could die, poor man, so peacefully, asleep under the ether.
“I don’t see how these Belgian nurses, so young and pretty, are able to stand the dreadful sights and do their work so well.
“The other day, when I was bandaging the stump of a soldier’s right arm, he said to me so sweetly in French ‘I am lucky to have one hand. Yes, I believe I can work with that.’ His left arm was injured, too, but I think will come out all right. A soldier who had both legs cut off and a wound in his head besides is doing very well. It is wonderful how brave they are. Among the wounded here we have two brothers, both struck by the same shell.
“A hundred entrants came in today, for the drive has begun, in this region at any rate. Ambulances go whizzing past the operating salle (which, by the way, is in a portable tin house with the imposing name of Albert and Elisabeth Hall) to the door of the receiving-room nearby. A few soldiers and infirmières gather about them, and the brancardiers lift out stretchers bearing limp forms covered with dark blankets.