Recollections of the Siege of Kut & After: Two Accounts by Indian Army Officers During the First World War in Mesopotamia—Besieged in Kut and After by Charles H. Barber & A Kut Prisoner by H. C. W. Bishop

Home » Non Fiction » First World War » Leonaur Originals » Recollections of the Siege of Kut & After: Two Accounts by Indian Army Officers During the First World War in Mesopotamia—Besieged in Kut and After by Charles H. Barber & A Kut Prisoner by H. C. W. Bishop 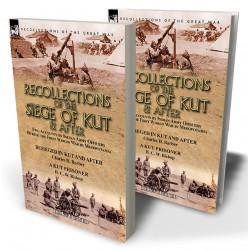 Two eyewitness accounts of the disaster of Kut and after

The First World War as it was fought in Mesopotamia (modern day Iraq) against the Ottoman Turkish Empire has received considerably less attention from British historians than other aspects of that conflict. While this was indisputably a ‘side show theatre’ of the greater struggle, it was nevertheless a difficult campaign, fought in an unforgiving landscape, often in punishing heat where disease took a greater toll of life than bullets. Most notably for the Allies it brought about a crushing defeat in the siege and fall of Kut which has become a stain on British military history in consequence of the treatment of prisoners of war by the Turks after the surrender. This book contains two first-hand accounts by Indian Army officers. These accounts are quite different but together they give an excellent insight into the experiences of those who defended Kut. The first account takes the reader through the actions (including the Battle of Ctesiphon) which led to the occupation of Kut in 1915, and graphically through the traumatic days when the besieged garrison fought to hold on until the relief column arrived. The second account continues the story as troops were marched into captivity. The author in company with a small party of companions decided to escape and his account of their bid for freedom makes for fascinating and thrilling reading.