Mrs. Pankhurst & the Right to Vote: the Leader of the Women’s Suffrage Movement in Britain 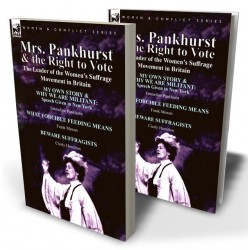 A giant of women’s rights and her times

The ending of the First World War in 1918 was also a momentous one for many British women, who, after shouldering their portion of the conflict and years of campaigning and protest, were finally granted their right to vote in parliamentary elections. As the centenary of this momentous victory for women’s suffrage approaches, Leonaur is publishing a series of books which highlight the struggle for women’s rights internationally. In Britain, the highest honours must be awarded to the leader of the suffrage movement in the early 20th century, Emmilene Pankhurst. This first book includes Emmilene Pankhurst’s story told in her own words, and is supplemented here by the text of one of her most notable speeches. Also included, to give modern readers a clearer perspective of the sacrifices women protestors made to establish their rightful place in society, is a description of the ‘force feeding’ of women prisoners, incarcerated for breaches of the law following suffrage protests. The text of a pamphlet by one of ‘the opposition’ is also included, it shows the ludicrous perspectives and claims some of the male population used during this period to foil the aims of women political activists.