The Romanovs, Rasputin, & Revolution—Fall of the Russian Royal Family—Rasputin and the Russian Revolution, With a Short Account Rasputin: His Influence and His Work from ‘One Year at the Russian Court: 1904-1905

Home » Non Fiction » First World War » Books containing two or more titles » The Romanovs, Rasputin, & Revolution—Fall of the Russian Royal Family—Rasputin and the Russian Revolution, With a Short Account Rasputin: His Influence and His Work from ‘One Year at the Russian Court: 1904-1905 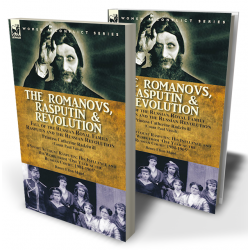 ’The astonishing last days of the Russian imperial dynasty

The principal work in this special Leonaur edition caused a sensation when it was first published since it is a ‘tell it all’ from the pen of an insider in the Russian court during the first years of the 20th century. Its revelations upon publication would have brought disaster upon the author, Count Paul Vassili, had he not died, thus putting him beyond the vengeance of all earthly monarchs. However, the author was not in reality the deceased count, but the living Princess Catherine Radziwill, who had written disguised under the dead man’s identity to avoid repercussions. Her deception was successful, and her true identity remained secret until after the catastrophic events that swept away the Romanov, making exposes concerning their lives irrelevant. Nevertheless, there remains a fascination with the affairs of the doomed Russian royal family. The murders of the tsar, his wife and their children, came about as a consequence of the Communist revolution in Russia, which abhorred all that it believed to be decadent and dissolute. No individual represented the disassociation of the royal family from its people more than the infamous ‘mad monk’, Grigori Rasputin, whose excesses, and influence over the Tsarina Alexandra and her circle, were a notorious scandal. Princess Radziwill’s writings open a window into the maelstrom of those incredible times revealing details and perspectives which could only come from an observer close to the events described in these pages. To give another view from a female eye-witness present at the royal court during this period, this Leonaur edition also includes a short account of Rasputin at the height of his influence.